Moscow, We Have a Problem in Lithuania 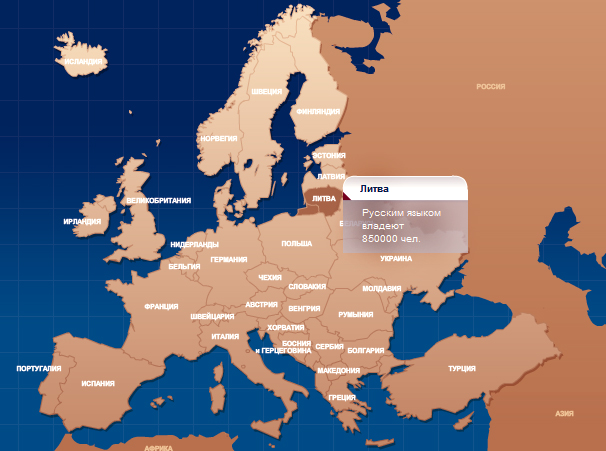 Why are non-profits financed by the Russkiy Mir foundation refusing to disclose its donors?

“Absolutely not,” Zoya Radzivilova replied when Re:Baltica called to ask for the names of foundations that finance her non-profit. 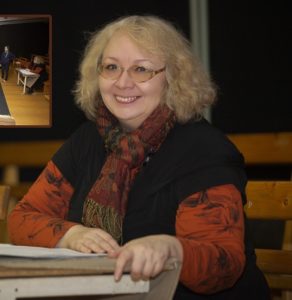 Radzivilova is the director of the Vilnius-based youth theatre group called Green Lantern. She also ran in two recent elections as a candidate of the Lithuanian Russian Union party. Radzivilova spoke fluent Lithuanian and didn’t hide her irritation with the question. The assistance she received abroad was no longer “Lithuania’s business,” she snapped back.

But that is not accurate. According to the Lithuanian laws, non-governmental organizations (NGOs) and associations, such as the Green Lantern, have to make their annual reports public. In the reports, the law mandates, NGOs should describe their activities and name the sources of their funding if media or members of organization are asking for such information.

When Re:Baltica informed Radzivilova about these laws, the woman’s voice got even louder. In fact, Radzivilova said she was going to report our request to the Moscow-based Russkiy Mir foundation.

While Radzivilova’s reaction was more inflamed than others, her refusal mirrored the vast majority of the respondents. Re:Baltica contacted two dozens of various NGOs serving Russian-speaking minority in Lithuania and asked for its annual reports. None of them returned Re:Baltica’s phone or email requests.

The denials drew different responses: leaders of some organizations said they were not preparing such reports, some said they didn’t want to provide detailed information on the phone, but didn’t follow up with any information in writing.

Re:Baltica’s further research found that some of these NGOs were financed in part by the Russkiy Mir foundation run by the Russian government. Re:Baltica’s written requests to the foundation about its funding activities in the Baltic region were not returned either. The secretary of the Russian Embassy in Lithuania, Zaur Letifov, also refused to discuss the assistance provided by Russkiy Mir.

What is Russkiy Mir?

Established by the Russian President Vladimir Putin in 2007, the Russkiy Mir (Russian World) foundation website states it was established to “promote the Russian language, as Russia’s national heritage and a significant aspect of Russian and world culture, and support Russian language teaching programs abroad.” 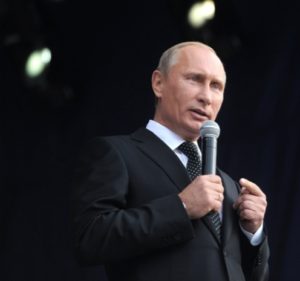 The Russian state earmarked 1 billion rubles (about 20 million euros) for Russkiy Mir for the first two years of operations. Trying to get more recent numbers from Russkiy Mir itself was not successful.

Russkiy Mir is headed by Vyacheslav Nikonov. In the early ‘90s, he was the advisor to the president Boris Yeltsin and to the director of KGB. Today he also heads and co-owns fund Politika, which provides political PR campaigns. According to the website, the fund promoted big Russian companies, and fulfilled requests of the President’s Administration, the State Duma and other state bodies.

The Foundation’s Board of Trustees is chaired by Lyudmila Verbitskaya, the Rector of St. Petersburg State University and the Chair of the International Association of Russian Language and Literature Teachers. 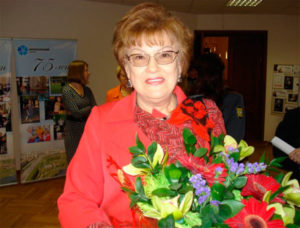 Among other trustees of the fund are Vladimir Yakunin, a close friend of Vladimir Putin and the head of the Railroad state company; and Sergey Lavrov, Russia’s foreign minister.

Both boards of trustees and directors must be approved by the president of Russia.

The foundation presents itself as a Western philanthropic model: the funding is earmarked through competition. However, Re:Baltica found consistent lack of transparency in the foundation’s activities. The annual reports issued by the foundation do not disclose what amounts were granted to which organizations, for example. It only states that over four years of its operations, 800 projects were funded in the European countries, Russia and other territories of the former Soviet Union.

“Paradoxically, they are talking about public and cultural policy, as effective as that pursued by the United States, Great Britain, etc. However, the concept is absorbed by the old institutions and the old officials,” Lithuanian analyst Nerijus Maliukevičius said in a comment about the management of the foundation. “The distribution of finances lacks clarity and the idea in general has many similarities with the archaic activities of the Soviet cultural policy. If we were to think about the effectiveness of such policy, it would require that staff of such foundations to exclusively consist of specialists who know well the cultural weight of Russia and the societies they work in. Currently, they are like a mixture of specialists and professionals with people close to the administration,” Maliukevičius added.

This way, the cultural policy is not only distorted, it provides room for Soviet-style reinforcement of public diplomacy, Maliukevičius argues.

What is Russkiy Mir funding in Lithuania?

A review of the publicly-available list of applications received by the foundation–that also specifies whether the applications were accepted or rejected–shows that at least eight organizations operating in Lithuania received assistance in 2010-2011. In addition to the Green Lantern, the list mentions International Culture and Arts Center operating in Klaipėda, Russian Culture Center in Vilnius, Visaginas Technology and Business Vocational Education and Training Center, the international recreational center Lupas also in Visaginas, Association of Teachers of Russian Schools in Lithuania, and Association of Russian Compatriots.

Projects financed by the foundation also include Russian language and culture centers at universities. Two state-run higher education establishments—the Lithuanian University of Educational Sciences that mainly trains teachers and the Šiauliai University–have also received support by the foundation. Although the universities are state-run, their autonomy enables them to shelter such centers with virtually no control from the state.

Some of the organizations financed by the foundation are headed by individuals listed as candidates of political parties to the Lithuanian parliament or municipalities. Radzivilova is one of them, along with businessman Igor Krasikov who heads the Association of Russian Compatriots.

But their party, the Lithuanian Russian Union is not that popular in Lithuania, nor is the only other party that represents Russian minority, the Russian Alliance. The two parties do not have any members in the country’s parliament and only a few representatives in the municipal governments. This is in part due to the fact that Lithuanian ethnic Russian minority is the smallest among the Baltic States, accounting for a little over five percent of the total population.

The lack of transparency has made it impossible to summarize the financial support granted to Lithuanian organizations. But Re:Baltica can provide a monetary expression of a few grants that some organizations disclosed. For instance, Visaginas Technology and Business Vocational Education and Training Center indicated it received over 10,000 euros for its project “My Eye on the World of Chekhov.” Project manager Irina Morozova said this was the center’s first project with financial assistance from Russkiy Mir. Morozova said the project, due to kick off in early 2012, will seek applying unconventional teaching methods for examining literature of Anton Chekhov in an effort to restore the interest in the Russian language and literature among students of Visaginas. The project will include a competition for the center’s students to provide unconventional interpretations of the Chekhov’s works.

The International Youth Union is one of the most active and visible organizations sponsored by Russkiy Mir over the past year. Among its 2011 projects supported by the foundation is the first competition of young Russian-speaking journalists Tochka.RU (Точка.РУ) and the competition of artistic reading Rodnaya Rech (Родная речь) held for the third time.

The organization’s leader Inesa Chekolayeva (Grigaliūnienė) said she could not specify the size of the assistance received, adding the information was confidential. 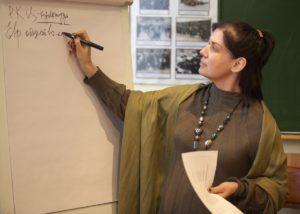 She noted she had applied for assistance for projects to Lithuania’s Culture Ministry, but got a rejection. (Although that request for funding focused on inviting children to reflect on the World War II, a controversial topic in Lithuania.) She said assistance from the Russian Embassy helped translate the other projects into reality.

Somewhat earlier, the organization published a newspaper Vestnik Sootechestvinika with support from Russkiy Mir. Asked to explain more about the project, Chekolayeva said the publication was cultural but wrote a lot about the Russia’s role in the World War II to liberate the country from Fascism. The newspaper was issued as a monthly publication between January of 2008 and April of 2010.

Member of the Lithuanian Parliament, Arvydas Anušauskas, and chairman of the Committee on National Security and Defense, noted that Russian government’s “cultural” money sent to Lithuania through foundations often impedes integration of the national minority. “There should be more transparency in places, such as Russkiy Mir-financed centers at universities, especially since the foundation is exercising the opportunities for public activities provided by our democratic country,” Anušauskas said.