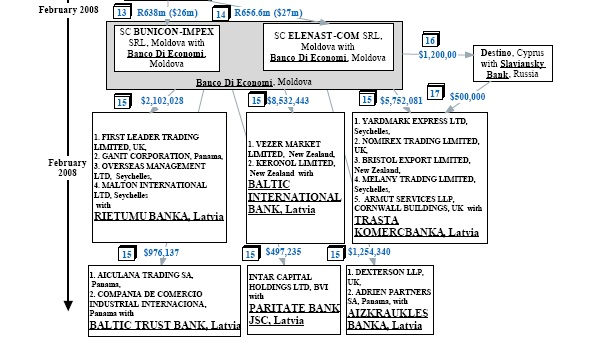 Sergei Magnitsky was a lawyer for Hermitage Capital (an American managed fund investing in Russia) who tried to investigate the theft of money from the fund. His colleagues at Hermitage Capital believe it possible that part of the 63 million dollars laundered through Latvian banks after being stolen from the fund could still be in Latvia.

In July of this year a law firm acting for Hermitage Capital sent a report to Latvian regulatory authorities stating that at least 63 million dollars were laundered in Latvian banks (read the report here). These millions are part of the 230 million dollar tax rebate to Hermitage Capital which Russian tax authorities granted in 2007 but which the fund never received. Hermitage representatives maintain that the money from the Russian treasury was stolen by high-ranking state officials who used Latvian banks among others to launder the money. When the fund lawyer Magnitsky started to investigate this matter, he was accused of non-payment of taxes and sentenced to prison. After one year of suffering beatings and being denied medical care the father of two sons died in prison in 2009.

The July report to the Latvian regulatory authorities contains schemes illustrating the banks and offshore companies (registered in New Zealand, Panama, Seychelles Islands, and the U.K.)  engaged in the money laundering. The company directors of the offshore companies include persons Re:Baltica has ealier revealed to be Latvian residents: Eriks Vanagels, Stanislavs Gorins, Juris Vitmanis and others.

The total amount that travelled from the Russian treasury to Latvian banks is more than 63.2 million US dollars, (31.7 million lats). Almost 20 million dollars came into Latvian banks through two Moldova- registered firms– “Bunicon-Impex SRL” and Elenast-Com SRL”. Some of these millions were used to make investments, including in Dubai real estate, and some spent on luxury cars.

Another 43 million dollars were deposited in the Latvian bank “Privatbank” by the British firm “Technomark Business”. The director of this firm is the Latvian citizen Juris Vitmanis and the owner is the Cyprus firm “Fynel Ltd.”, founded by the afore-mentioned Stanislavs Gorins of Latvia. The directors of “Fynel Ltd.” are also Latvian residents: Vitmanis, Vanagels, Daniels Bangers, and Martins Rauda.

Re:Baltica has earlier reported that the names of these “nominal directors” appeared in connection with substantial fraudulent state purchases in Russia and in the Ukraine. For example, Stanislavs Gorins was a director of the firm that won the contract to sell to the Ukraine government oil drilling equipment for 400 million dollars, almost double the real price of 248.5 million dollars according to journalists.

Vanagels, Vitmanis and Gorins also appear as directors of the firm Olden Group LLC, which sold vaccines at double their real prices to the Ukrainian state.

Re:Baltic in its research report “Dirty Money” has revealed that the so-called “ well- known Russian banker” Eriks Vanagelts is really a 71 year old pensioner, and that Stanislavs Gorins is a relatively unknown business consultant. An investigation by international journalists last autumn revealed that the afore-mentioned Latvian residents have sold their signatures for money to the company “International Overseas Services” (IOS). This company has sold offshore companies in Riga for more than ten years.

These two nominal directors do not appear wealthy, but during questioning by the Latvian financial police they are being represented by one of the most expensive of Latvian law firms- Rode and Partners.  One of the firm’s lawyers, Janis Rozenbergs, refused to say in the spring who was paying for the defence of these “directors”.

Re:Baltica’s research also showed that IOS was closely connected to the former Parex Bank council head Gints Poiss. Parex had a broad client base in countries previously part of the Soviet Union, but according to law neither the bank nor its employees were permitted to engage in selling offshore companies.

Meanwhile Hermitage Capital representatives expressed hope to Re:Baltica that Baltic authorities would investigate the Magnitsky matter. The fund requested the Latvian General Prosecutor and the Latvian bank supervisor Financial Capital and Market Commission (FCMC) to freeze relevant accounts(.doc) at Aizkraukle Bank, Baltic International Bank, Baltic Trust Bank, Rietumu Bank, Trasta Kommercbanka and Paritatas Bank. Thus far the Latvian authorities have responded formally; the FCMC indicated that it will, within the limits of its competence, check the information, but indicated also that it does not have the authority to freeze accounts. For its part, the General Prosecutor said that it had sent the information to the state police(.pdf).

Other governments have been much more active. In July 2011 the United States government barred Russian residents connected to the Magnitsky scandal from entering the US.  Swiss regulators have frozen 8 million euros in a Zurich bank account belonging to Vladlen Stepanov. It was Stepanov’s wife who ordered Russia’s biggest ever tax rebate, which was subsequently brought to light by Magnitsky. Magnitisky’s colleagues have so far persuaded about twelve European legislatures to instate travel bans as the US has done.

In response to a request to evaluate the responsiveness of the Latvian authorities, Hermitage Capital’s representatives answered cautiously. In an email a fund representative stated that “it is still a bit early to make a judgment on Baltic legal cooperation. We have filed criminal complaints with the Latvian, Estonian, Lithuanian and Finnish law enforcement authorities. All have confirmed they received the criminal complaints and are going through the evidence we provided. So far, we have received confirmation that the Finnish Police have opened a money laundering investigation and we are waiting for confirmation from the other three countries. Given the quality of the evidence, we would be surprised if we didn’t see a full scale investigation in all four countries in due course.”