Re:Baltica invites to a conference on low wage earners in Latvia and the region 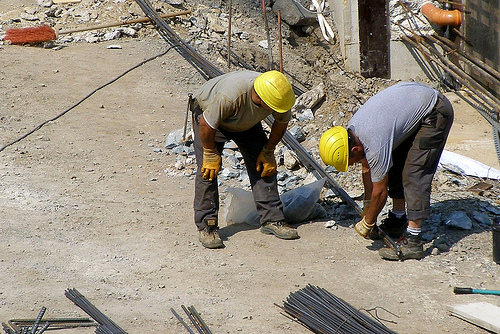 What are important labour issues in other countries in the region? What can we learn from each other’s experiences? What are the alternatives? Some answers will be provided in conference taking place on May 22 in Stockholm School of Economics in Riga were from 16.00 to 18.00 experts and journalists from Latvia, Norway, Sweden and Poland will generate discussion on this topic. The conference is free of charge and anyone can participate.

How do employers avoid paying the minimum wage and save on labour costs? Do trade unions effectively defend workers’ rights? In its latest investigation into low-wage working conditions, Re:Baltica looked for an answer to these questions. Two journalists from Re:Baltica worked undercover to learn that people have to work double shifts to earn between 280-350 euros pre-tax per month. You can read the project: www.rebaltica.com

Does Norway treat all workers equally or do work conditions and wages differ to migrant workers and Norwegians? By the end of 2011, more than 100 000 persons from the accession states were registered as employed in Norway, in addition to non-employed family members. Construction, cleaning, food processing, shipbuilding and agriculture being the main recruiting sectors where workers from Latvia find a place to work.

17:10 – 17:40 Anne Danielsson Oberg (Sweden)
Theme: The Swedish model for welfare system and negotiations – a bumpy but quite successful road

Taxes have been reduced and the cooperation between unions, employers and government has increased. One lesson is that labour policy is difficult in times with high unemployment, and another lesson is that a working system for wage setting is more important than so many other things for a working economy.

Trade unions in Poland are rejecting the employers’ proposals for more to flexible working hours and changes in the calculation of them.  They demand that the so called “junk agreements” be abolished and minimum wages raised. The social dialogue in Poland still leaves a lot of room for improvement, but the situation is getting better. The main problem is the lack of a unanimous position among the main associations of employers in Poland and trade unions on a variety of issues.

18:10 -18:15 Conclusions. Thank you.
Discussion will continue over coffee in the lobby

Inga Springe is a founder and executive director of The Baltic Center for Investigative Journalism, Re:Baltica. Previously for six years she worked as an investigative journalist at the leading Latvian daily newspaper Diena.  In 2010 she went to the USA as a Fulbright/Humphrey program fellow, studying journalism at the University of Maryland and completing professional affiliations at leading investigative journalism publications, including the Washington Post, Mother Jones magazine, and The Center for Public Integrity.

Anna Danielsson Oberg has worked as an industrial relations reporter for over 25 years, 20 of the for one of Sweden’s second biggest morning paper. Since 2007 she is a freelance journalist and have written five books and several reports about labour and social policy and the role of the swedish dialogue. The last two books is about the union participation i Europe with examples from Estonia, Germany, Norway, Italy and Sweden. The latest book will be released in mid May and is about wage differences between men and women in Sweden.

Line Eldring  is a senior researcher at Fafo Institute for Labour and Social Research in Oslo, Norway. She has been central in developing Fafo’s research on European mobility of labour and services in the wake of EU enlargement, and is an author of many academic publications on topics such as minimum wages in Europe and the conditions of migrant workers in Norway.

You can registrer for the conference here – Registration