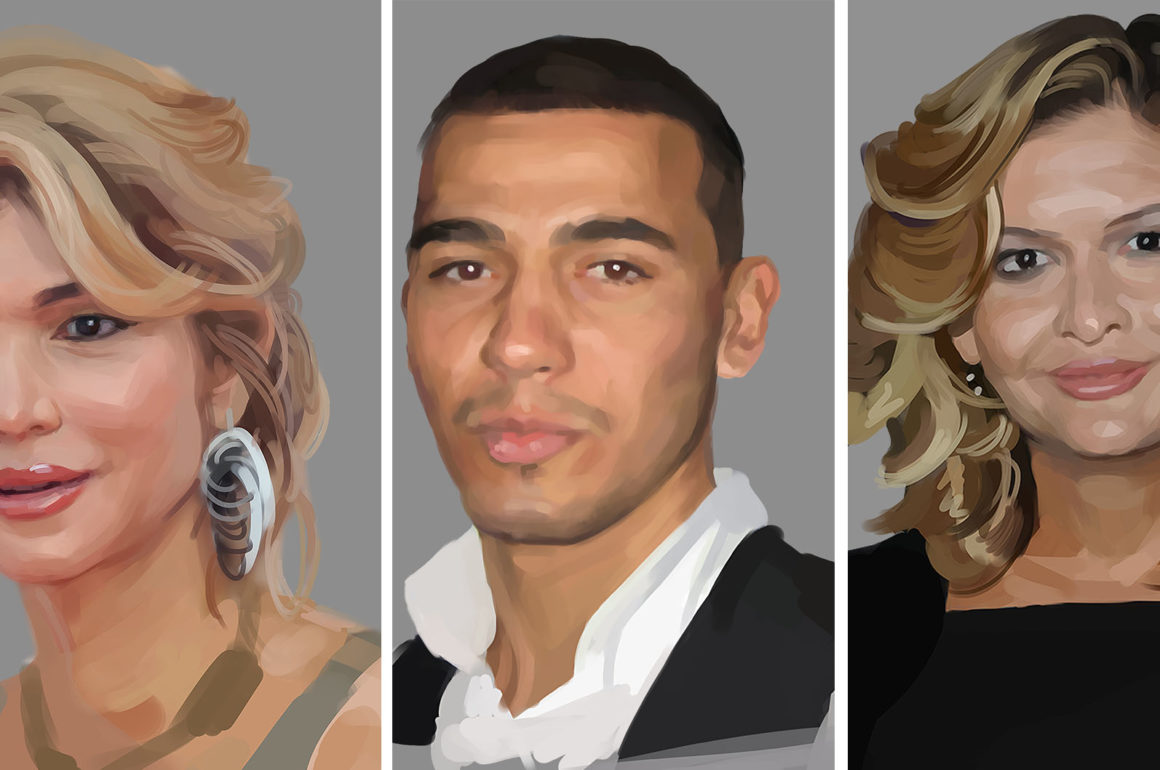 Children of Uzbekistan’s elite has bought property in Latvia, used country to give birth to first-family child and allegedly used local banks to handle millions of dollars in bribes. While more than 1,500 Uzbeks have taken advantage of the country’s controversial “golden visa” program, it remains a silent and closed community.

According to his Facebook posts, Azim Ganiyev, the son of Uzbekistan’s minister of foreign trade, enjoyed his life as a student in Riga, although sometime he felt homesick.

His posted pictures show a dark-eyed, baby-faced young man, dining with friends and travelling around Europe.

Ganiyev was far from his native Uzbekistan, studying international tourism at “Turība”, one of Latvia’s business universities. He never finished his studies, though, and was expelled  a year later, in 2014, “Re:Baltica” was told in “Turība”.

Ganiyev did not respond to questions in Facebook about why he chose Riga, or why he left. According to his status update, he is now back in Tashkent.

His brother, Aziz Ganiyev, is still a student in Riga, hoping to get a degree in business administration from Baltic International Academy (BSA) this year, the administrator of BSA confirmed to “Re:Baltica”.

Uzbek nationals have become the second biggest group of foreign exchange students, comprising 13.5 percent of the total, with almost 900 students scattered around Latvia’s higher education establishments. Only Germany has more, according to the Latvian Ministry of Education.

Latvia’s popularity as a destination is explained by regional advertising of its  the degree programs, which are cheaper than, for example, those in the United Kingdom. Also, Latvia is the only Baltic country to have an embassy in Uzbekistan, making it easy for prospective students to get visas to enter the European Union (EU), according to pro-dean of “Turība”, Imants Bergs.

The Ganiev brothers are not the only children of the Uzbek elite to make their way to  Latvia.

Since the mid-1990s, Latvia has nurtured diplomatic relations with Uzbekistan. Diplomatic passport holders can travel without visas. Since 2004, Uzbekistan Airways has flown from Tashkent via Riga to New York, providing Latvia with its  only transatlantic service.

Three of Latvia’s five presidents since independence have made official visits to Uzbekistan, while the Uzbek president has visited Latvia three times.  His last visit in 2013 outraged Uzbek human rights activists, who pleaded with Latvian diplomats to prevent “one of the most ruthless dictators of our time” from laying flowers at the Freedom Monument, the symbol of Latvian independence. 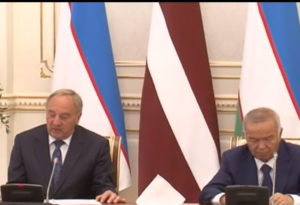 Latvia dismissed the activists’ plea, perhaps not wishing to jeopardize its role as intermediary between Uzbekistan and NATO, which has long moved cargo through Uzbekistan to  NATO soldiers in Afghanistan.

There are other ties. In  2010,  Latvia introduced a controversial “golden visa” cash-for-EU-residency scheme which gives five-year residency permits to people who invest in property or the country’s many banks. Since then, 1,525 Uzbek nationals have obtained the permits, the third largest group from the former Soviet countries (after Russia and Ukraine) who have used the scheme, statistics from Immigration Board (PMLP) show.

Other arrivals did not obtain golden visas, but instead focused on the country’s banks, which specialize in catering to  non-residents. Several of the banks have ended up in international money laundering scandals.

When the 2008 global economic crisis took down Latvia’s largest domestic bank, “Parex Banka”, Gulnara Karimova arrived  in Latvia to save her multi-million deposits.

She is the daughter of Uzbekistan’s president Islam Karimov. 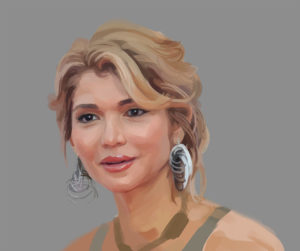 According to a lawsuit seeking to recover monetary damages filed by the US Department of Justice, Gulnara Karimova deposited around US$ 446 million  in alleged bribes in two Latvian banks: “Aizkraukles Banka” (now ABLV) and “Parex Banka” (after bailout renamed “Citadele”). ABLV declined to comment, saying that the bank closely cooperates with investigators. “Citadele” insisted it acted in line with the respective laws of the time.

The lawsuit states that between 2004 and 2012 “a close relative of a high-ranking Uzbek government official” received more than US$ 800 million in corrupt payments to shell companies related to the Uzbek official.

The lawsuit never names Gulnara Karimova. The case revolved around massive bribes from Scandinavian and Russian telecom companies who were interested in getting access to Uzbekistan’s market.

Lola Karimova-Tillyaeva is the second daughter of Uzbekistan’s president. Unlike her oldest sister, Gulnara, Lola, 37, is relatively unknown to the public.

In the summer of 2006, she gave birth to her second child, a son, in the Latvian capital, Riga. In Latvia, she was hosted by Gulam Gulami, a businessman of Afghan origin, who has been living in Latvia for a long time and gained citizenship.

Lola Karimova spent the last months of her pregnancy near the seaside in a new house in Jurmala, a Baltic sea beach resort town near Riga and playground for the nouveau riche. The home was purchased for about € 2 million in the name of Gulami’s wife, Valentina, according to data from the Land Registry. 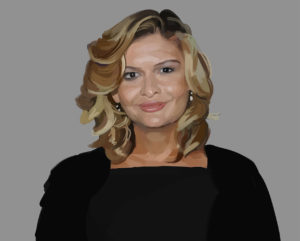 In autumn 2006, Lola Karimova and her family left Latvia. She does not appear to have  business connections there. According to the Business Registry data, her husband Timur Tillayev established a company called “Euro West Invest”, but it never operated.

The Karimova daughters’ cousin, Akbar Abdullayev, arrived in Latvia at the same time as his Lola Karimova did, and settled into a house next to hers. According to the Latvian Land Registry, 23-year-old Abdullayev paid € 1.4 million for the  home with a swimming pool and a guest house,  planting evergreens in the  big back yard. 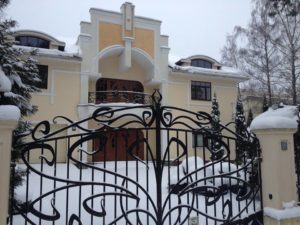 A house of Akbar Abdullayev in Jurmala. Photo: Re:Baltica

Abdullayev, once considered  a potential successor to Karimov in the Uzbek blogosphere,  cut quite a swathe in Latvia. He bought a € 200,000 Bentley, which when it was registered in 2011 was one of the most expensive cars in the entire country. A year later he bought an apartment in a prestigious Riga neighborhood near the river Daugava, with a view of to the picturesque Old Town, according to the Latvian Land registry.

Abdullayev turned his apartment into a home office for his two hotels, bought in the mid-2000s for at least € 18 million in partnership with the Gulami family; later, Abdullayev lost them to Gulami. Exactly how that happened remains a matter of much speculation and reads like a detective novel, with allegations of a beating, a murder attempt, a bribed judge and suspicious court rulings involving murky offshore companies.

Today, the gutters at Abdullayev’s Jurmala home are overtaken by weeds.

By the time votes were cast in Uzbekistan’s presidential elections in 2015, Abdullayev had been sentenced to 10 years in prison for leading an organized crime group in the Ferghana Valley, according to the US-financed “Radio Free Europe/Radio Liberty”.

Another offspring of high-ranking official who got an EU residency permit from Latvia is Timur Kerimov, a son-in-law of Rashid Qodirov, the former Prosecutor General of Uzbekistan. Qodirov was sacked from his post in April 2015 after 15 years of service and transferred to work in the Constitutional Court.

According to the Latvian Land Registry, Kerimov bought an apartment in the center of Riga in 2010. He has also registered two enterprises, “ITIR Solutions” and “IVT Solid Energy”, but the companies show no activity. The last was sold to another Cypriot offshore few months after it was founded in 2013.

For several years Kerimov headed the regional bureau of Uzbekistan Airways in Riga. When “Re:Baltica” tried to find him there recently, the sole worker explained that he has been gone for a year. Uzbekistan’s embassy in Latvia did not respond to several meeting requests and did not reply to  questions sent by “Re:Baltica”. Members of the Uzbek community in Latvia proved to be very elusive and silent when approached by “Re:Baltica”.

“People are afraid,” said  Farruh Yusufiy, an Uzbek journalist for Radio Liberty living in Prague and participating in this investigation. He says Uzbek officials are afraid to be quoted divulging even publicly available information,  fearing retaliation.

– “Freedom House” ranks Uzbekistan in the top “10 Worst of the Worst” countries in terms of freedom and civil liberties. In 2005, government forces opened fire against protesters in Andijan, killing hundreds.The EU introduced sanctions in 2005, but under pressure from businesses, they were lifted in 2008.

Translated from Latvian to English by Aleksis Tapins