MEPs can’t hire relatives? Ask the Latvians how to get around the rules 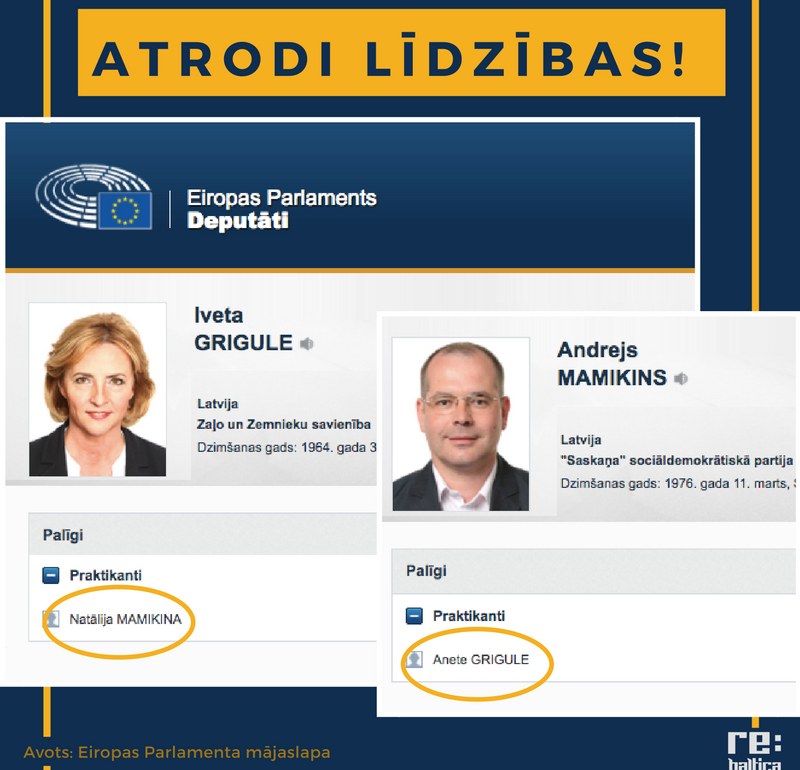 Latvian members of the European Parliament, Iveta Grigule (ZZS) and Andrejs Mamikins (Harmony Centre), are circumventing the parliament’s rules preventing conflicts of interests and employing each other’s relatives as interns, Re:Baltica has found.

The information on the EP’s home page shows that Mamikin’s intern is Grigule’s daughter Anete, but the same position in Grigule’s office is occupied by Mamikin’s partner Natalija.

Each month MEPs get an allowance of 23,392 euros to employ assistants and interns whom they are free to choose. The EP only checks if the documents are in order and pays out the money, which for Brussels-based interns cannot exceed 1,449 euros a month.

Mamikins told Re:Baltica that he reviewed several applications for the post, including an offer to take on board Grigule’s daughter, who allegedly speaks good English and French and helps him with work in the Foreign Affairs Committee. “I have known this young lady for a while and I am found of her,” he said. Mamikins refused to disclose her salary as per mutual agreement. He refused to answer if he asked Grigule to take as an intern his partner in return, replying “no comment” to every question.

Grigule did not reply to Re:Baltica’s questions which were emailed to her and delivered in a hand-written letter to her Brussels office when our reporter failed to locate her in the parliamentary working rooms. Instead of a reply, Re:Baltica received a phone call from an EU official who was looking into a complaint that the journalist had violated rules on making recordings inside the EP.

Re:Baltica offered both interns the right to reply, but they did not respond. Information, available on the internet, indicates that Mamikina has studied law in the University of Latvia, but Grigule’s daughter, after graduating from secondary school in Riga, studies in Vesalius college in Belgium.

The EP has a long history with conflicts of interests by MEPs who treat their office as a family business. The practice of employing relatives as assistants was legal until 2009, and both leaders of political groups Grigule has been a member of – the eurosceptic EFDD and the liberal ALDE – have at times employed their wives. The practice of employing close relatives as assistants has been banned since 2014.

“Ever since the rules changed on MEPs employing their family members in 2009, they’ve been finding new and creative ways to keep it in the family. But, the simple fact of the matter is, MEPs should not be funneling extra taxpayers’ money back into their own homes. They should be following both the spirit and the letter of the rules. If they are not, the Parliament must take immediate action and if the rules aren’t adequate then change them,” said Nicholas Aiossa, EU policy officer for the NGO Transparency International”.

Formally MEPs have not violated the rules as only employing their own relatives is forbidden, the EP’s  press service said to Re:Baltica.

Mamikins, who before becoming a politician was a popular TV personality and still is not a member of “Harmony Centre”, and Grigule were both elected to the EP in the summer of 2014. Mamikins is a member of the centre-left S&D faction in the EP, while Grigule after a brief stint in the EFDD left the eurosceptics and joined the liberal ALDE.

Why does she need 3 assistants in Brussels, 5 in Riga, and an intern? Since during the last two and half years since her election she has spoken in the plenary session just 4 times, once as a shadow reporter and has asked seven written questions to the European Commission.