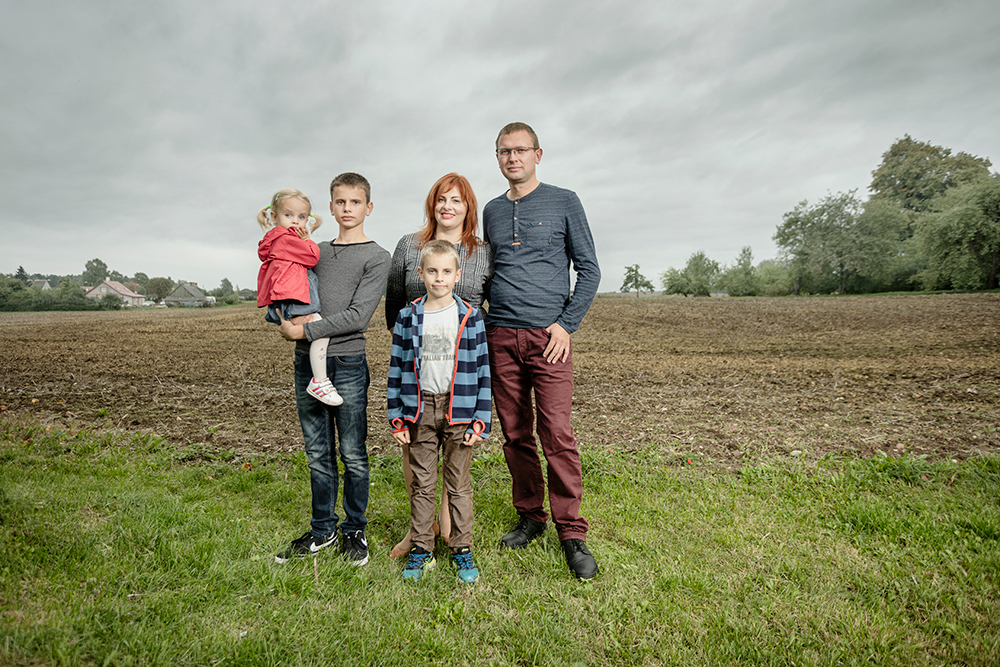 The Dūzis family has four kids. Amēlija (2), Klāvs (8), Kristaps (13) and Viesturs (18). The eldest son is studying in Rīga and wasn’t present at the time of the photoshoot. Photo: Reinis Hofmanis

Death rate is still bigger than the number of newborns, and there is simply not enough women to have them.

The Dūzis family’s youngest has just started kindergarten and got sick once again.

Knowing that the kindergarten’s first year means that the child spends “three days there and a week at home”, often the family relies on grandparents for help. The parents of a two-year-old Amēlija also still employ a nanny.

The day when Re:Baltica visited them in Dobele, a tiny town of about 10 000 people, located 75 kilometers from the capital Riga, was different because Agnese, the mother, was taking her youngest to the doctor. After that she put Amēlija for a nap and sat down to work for three hours in front of the computer at the kitchen table. She will repeat the routine later in the evening.

“I have very good bosses. They said it from the very beginning: it doesn’t matter where I am, the most important thing is that the job gets done. When Klāvs asks to come along to music school for piano practice, I ran out out of the office for half hour,” says Agnese.

The Dūzis family has four kids. Apart from Amēlija and Klāvs, who goes to the second grade, there is also a 13-year-old Kristaps and an 18-year-old Viesturs. Agnese is lawyer in the agricultural company, her husband Kaspars works on a large farm.

Good employers and decent salaries. Supportive family. Life in the small town, where everything is within reach. These are the reasons why having four children was not a hard choice for Dūzis. 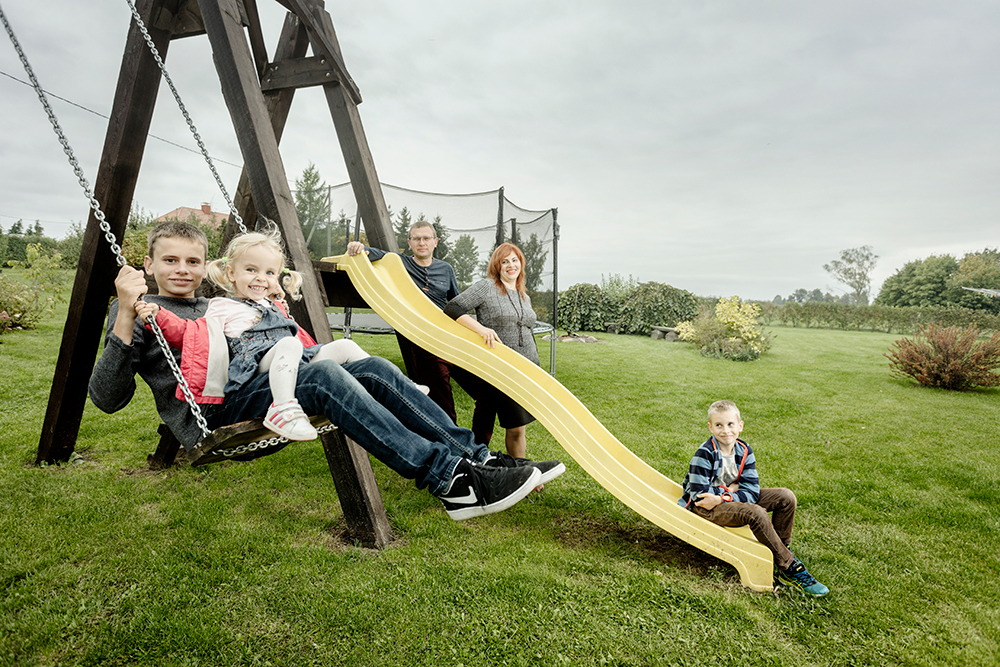 In Latvia, when economy grows, so does the number of the families with many children.

10 years ago 15 percent of newborns were born to families that already had two children or more. In 2016, the share rose to 20 percent, according to the data from the Central Statistical Bureau of Latvia.

The families that already had at least one child and decided to have more account for a slight increase in Latvia’s birthrates – a welcome sign in the country continues to lose population due to massive emigration and death rates that beat birth rates for over the last 20 years.

On the other hand, the number of firstborns is falling: as does the number of women who could have them. The numbers of potential mothers continues to fall by several thousands every year. It happens partially because of the mass emigration to wealthier EU countries. Another part of explanation is the economically turbulent 1990s, after the fall of the Soviet Union. 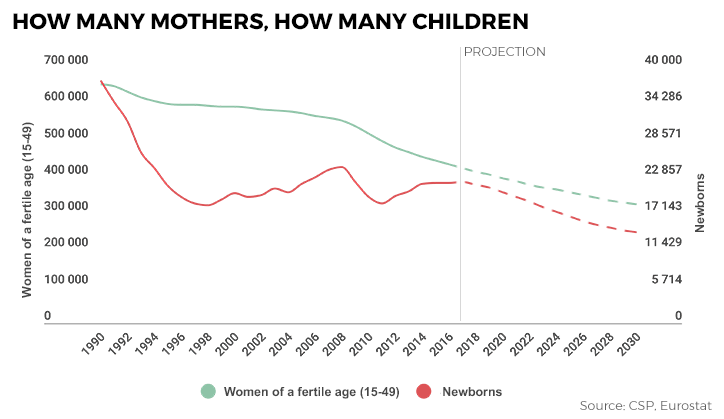 Girls who were born at that time are now 27 years old, an average age when women in Latvia decide to have their first child.

Eurostat, the EU statistical bureau, calculates that the number of women in childbearing age (15-49 years old) will decrease by 23 percent by 2030 compared to now. The fall in the number of newborns will be even larger: about one third. Only 14,000 babies will be born in Latvia in 2030.

According to the Eurostat scenario the population in Latvia will fall to 1.6 million from the current 1.9 million. One in four Latvians will be 65 years of age or older.

As the number of women in childbearing age diminishes, families with multiple children could slow down the trend. However, the current average of 1.74 children per woman is comparatively high, the largest indicator since 1992 and among the top in EU. For a normal change of generations to take place, this average must increase above 2.

This is what the right-wing, anti-migrants National Alliance, the government’s chief driver behind the push to increase the birth-rates, is hoping for when it demands higher financial support for families with three children or more.

Experts predict small growth, but don’t believe the average can climb above the needed line. Aivita Putniņa, a social anthropologist, who has researched birth rates, calls it “a demographic panic” on the part of politicians, with little connection to a person’s real life and values. “If the state says that every family must have two children, then the people will say, yes, it’s a very good idea, but it is not for me. They connect having children to their own resources, values and how they live their lives.”

The research shows that people often want to have two kids or more, however the real number of children depends on the income and job security as well as the quality of the relationship and support of the family. The experience with the first child also matters.

On average, women in the EU had 1.58 children in 2015. In none of the EU countries the average reaches 2, a figure needed for a change of generations to occur naturally. Traditionally, more children are born in France and Scandinavia, where women are encouraged to quickly return to the work while men are encouraged to be involved in raising children. These countries also provide a generous social policy and high gender equality.

In Latvia, the social handouts for family support is increasing, but politicians avoid addressing broader issues related to gender equality, such as shared responsibilities or part-time work while still receiving the state support, says Putniņa.

Families with a single breadwinner have higher risk to become poor if the job is lost or the parent gets sick. About 40 percent of Latvian children are born to couples whose relationship is not registered. One in every three children are raised by a single-parent, with minimal state support. Parents who raise children with disabilities live in permanent crisis.

“Policies are based on value judgments: I know what the right thing to do is and we support it. It doesn’t take into consideration people’s actual situations and needs. The policies target the birth rate quantity, not the quality of life for those children who have been born,” said Putniņa.

In a research in 2013, Putniņa and colleagues compared various indicators over the period of 16 years. They concluded that the determining factor to having more children is not child support payments from from the state, but the health of the economy. The payments themselves did not directly impact the birthrates. 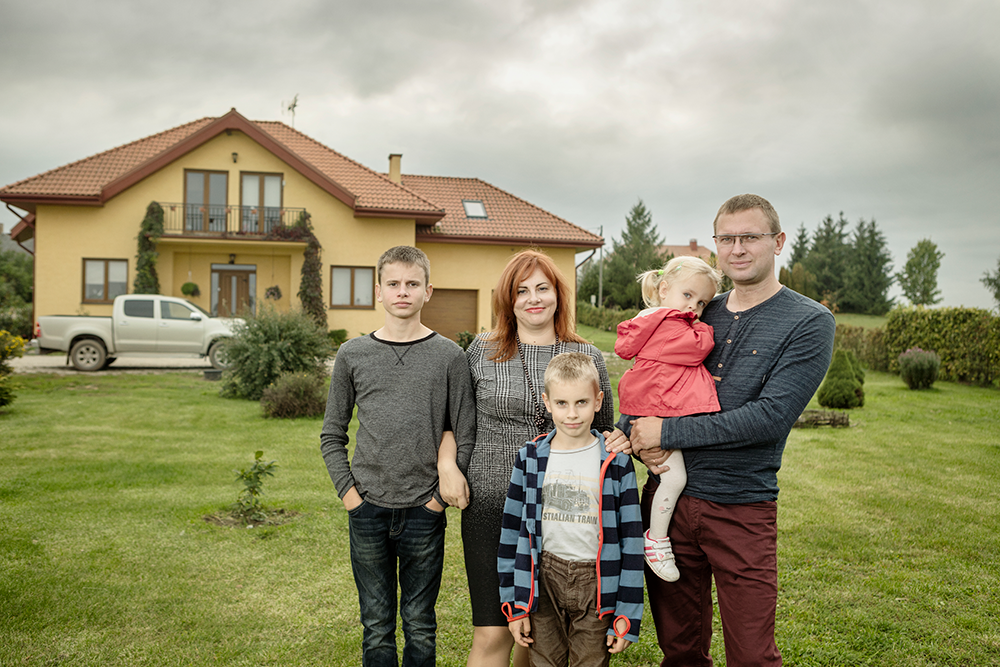 For the Dūzis family, it wasn’t the state support that motivated them to have a large family.

All four of their children were born in the span of 16 years, which saw the good times and the bad.

“When our first child was born, we didn’t have anything,” Agnese recalls. Back in 1999, she studied at two universities. The family lived off the husband’s small salary. In the child’s first year, they received only 42 euros a month as state support. Agnese started working. As salaries in Riga are higher, she went there, losing a lot of time while stuck in a traffic. The management allowed her to change her schedule: to come early and to leave early. She was promoted. Her husband took kids to kindergarten and collected them in the evening.

The economy was booming. Having gained experience, Agnese decided to look for a job in her hometown of Dobele. Dūzis family took mortgage for next 20 years and, as they were planning their new home, settled on three kids. Later, they decided to go for another one.

They benefit from the massive help of the local Dobele municipality which, much like other rural municipalities in Latvia, gives to multi-child families generously to discourage them to move to Riga. Food at school, in kindergarten, extracurricular music lessons, summer camps, folk dancing for all three sons, swimming pool — all is free of charge.

A lot of money is spent on equipment for boys’ triathlon training which is organised by the private club. Triathlon is where family spends their weekends: together, travelling, seeing places.

When asked why they decided to have four kids, Agnese thinks for a minute. “Because this is what we wanted. We practically live for them. We don’t know what we would do if we didn’t have children. We’d sit outside on a bench and think which apple tree branches we should cut by a few centimeters or where to put another flower bed.”

END_OF_DOCUMENT_TOKEN_TO_BE_REPLACED

Illustrations and graphics: Lote Lārmane, Re:Baltica
Data analysis: Zane Vārpiņa, a demographer and
teacher at the Stockholm School of Economics in Rīga