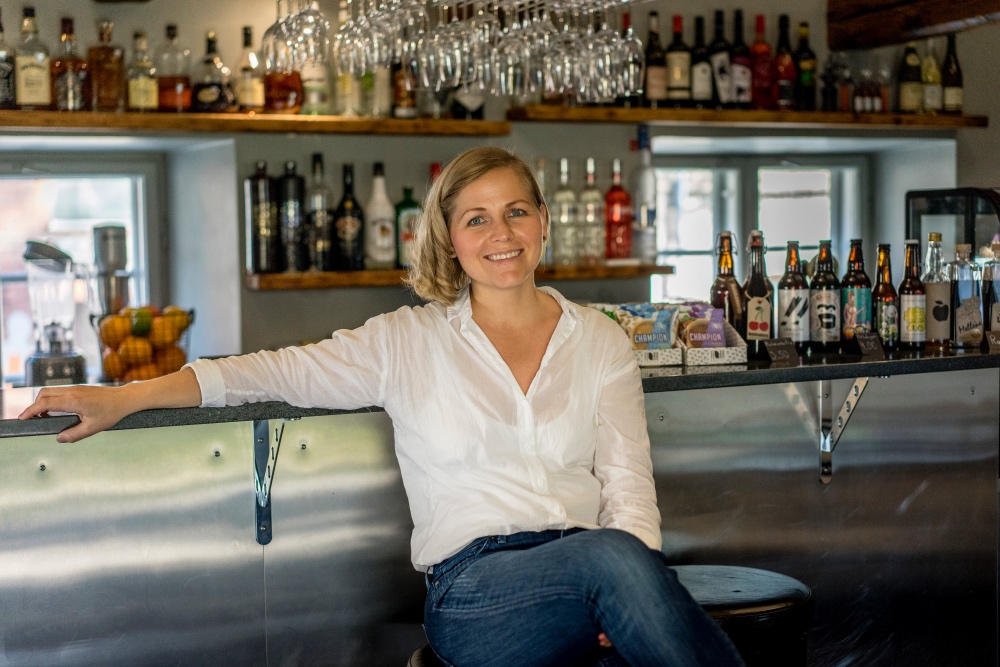 At least 9,500 people should return to Latvia from abroad every year in order to compensate the expected shortage of labor. Currently, the number of returned expats is half of that and an exodus continues.

The 34-year-old Lelde Strazdiņa became a resident of the town of Cēsis in northern Latvia only a year and a half ago. The gingerbread-town with a population slightly over 18,000, which traces its history back to the 13th century, sits on a series of ridges above the picturesque river Gauja overlooking the woods below. After spending 17 years abroad, she was attracted to quiet, pleasant environment and support of the local government. Lelde now breathes a new life into old furniture in her workshop.

We had agreed to meet at a small coffee shop. From a distance I see her effortlessly speaking in Spanish to a couple of tourists about the local restaurant scene. The ability to speak five languages is part of her global baggage.

After graduating high school, she left for Munich, in Germany, to work as an au pair. In her search for warmer climate, from there she moved to Barcelona, where Lelde studied interior design and restoration. To earn something extra to add to a meagre student’s income, she was packing presents at a cosmetics and lifestyle store chain owned by a Dutch company. Later, as she climbed the career ladder, she trained new staff and consulted opening new stores in Spain, the Netherlands and in other countries.

“It was a good job, a good pay. A life in airplanes and hotel dinners at 10 p.m.,” Lelde recalls her life. She got burnout at work at the same time as her relationship with her boyfriend deteriorated. With only a backpack she departed for Latin America, where she traveled alone around Mexico and worked as a volunteer with children in Guatemala.

And then she returned to her mother in Cēsis.

“Having lived here for the first week, I felt and saw myself living here. Not for a moment have I regretted that.”

A young, educated, enterprising woman, with a rich experience abroad, Lelde represents a type of returned expat that is craved by Latvia’s policy makers. Encouraging them to return from abroad is one part of the plan to fill the yawning gap in the labor force. It’s expected that by 2030, the working-age population will shrink by 20 percent and almost half of Latvia’s population will be 50 years of age or older. As a result of migration, Latvia has lost over 250,000 people since 2000, according to the data from the Central Statistical Bureau data.

In the policy documents, the re-emigration plan is painted with rosy colors.

Even though the population would continue to dwindle thanks to the low birth rates and high death rates, the re-emigration would slow down the decline.

“It clearly won’t happen. There is no movement in that direction. We continue losing around 10,000 people a year, similar to a size of a small town,” says the director of the research of diaspora and migration issues at the University of Latvia, Inta Mieriņa.

According to the Central Statistical Bureau, more than 20,000 people left Latvia in 2016, of which more than 17,000 Latvians. At the same time, around 8,000 people moved to Latvia. Slightly more than 5,000 of them were returning expats. The numbers remained pretty similar in the previous two years, offering no change in the trend.

The ministry now admits that the forecasts were overly optimistic and represented a target scenario. It was created based on the 2014 data, when the trends were positive. In reality, it turned that the emigrants outweighed the immigrants by so much that it is beating even the lowest estimates by Eurostat, the EU office of statistics. 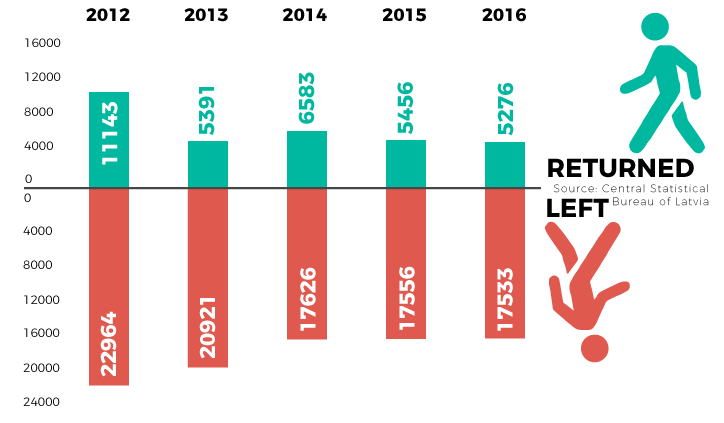 Mieriņa points to another negative factor contributing to this negative trend. Researchers at the International Monetary Fund have concluded that mostly very well-educated people migrate from Latvia, Lithuania, Czech Republic, Hungary and Poland. Great Britain hosts about two-thirds of all 21st century migrants from the OECD countries in Europe. About half of them have university education, shows research by Mihails Hazans, a migration researcher at the University of Latvia.

The IMF researchers point that in the long term it means weaker governance because it is mostly educated that demand changes in the society while a poorly governed state encourages further migration. It also does not allow to attract high level specialists, who could lower the migration negative effects.

The research model by the ministry of economy is based on the GDP forecast as well as the expectation of average wage growth. The average wage has grown in 2017 exceeding 900 euros a month before taxes. The wages however still fall behind wages in the UK, Ireland and Germany which saw a significant influx of Latvians during the crisis of 2009-12. Even a more stark difference is the minimum wage. There are more minimum-wage earners in Latvia than elsewhere.

In 2014, researchers at the University of Latvia led by Mieriņa surveyed more than 14,000 Latvians abroad. Only 16 percent of them planned to return in the next five years. Every third said they would consider to return under certain circumstances. Another 30 percent don’t think about returning at all. “There are many emigrants who do not plan to return at the moment, but they are considering how the situation will develop. It’s important while these people sit and wait that they maintain ties to Latvia, so that there would be people who return when the situation improves,” Mieriņa says, underscoring the need for the diaspora policies.

One of the frequently-mentioned reasons for staying abroad is the belief that it is impossible to find suitable work in Latvia. Mieriņa also points out that there are different groups of people who choose to leave Latvia.

“For example, health care workers are leaving in huge numbers and they are the ones who plan to return the least. Latvia has low financing for the medical care system, the wage gap is huge and that situation is totally understandable.”

In the recent years, about 15 doctors a month get permits to work abroad, the information from the Doctors Association shows. Part of them are foreigners and not all of them leave the country. However, most of them are younger than 35. The health ministry estimates that by 2025, there would be a shortage of about 1,000 doctors in Latvia. The shortage of nurses would double to 3,000.

Those who leave are critical of the Latvian social welfare guarantees, health system and education opportunities for their children. There is also dissatisfaction among those who repatriated. Even though the research shows that the former expats are more economically active at home, earn more than others, they evaluate the work of the Latvian government more negatively.

A plan, but no action

In 2013, the government adopted the re-emigration plan for the following three years. The responsibility for the implementation was shared among 20 different government institutions. The final financing was about half of the 3 million euros it was supposed to received. Many of the activities of the plan remained on paper. For example, there still no one agency responsible to answer questions of the returned, even though they say they would like to see the information about job searches, starting a new business or other basic information as necessary form of support.

After long discussions at the end of 2016, it was decided that there won’t be a new plan once this one expired. Instead, the re-emigration policy will be handled by the foreign ministry that is already responsible for ties with the diaspora. Asked what specifically will be done, the ministry says that the specific measures will be included in the diaspora policy action plan for 2019-2025. It means that it’s unlikely there will be any new support between now and 2019. 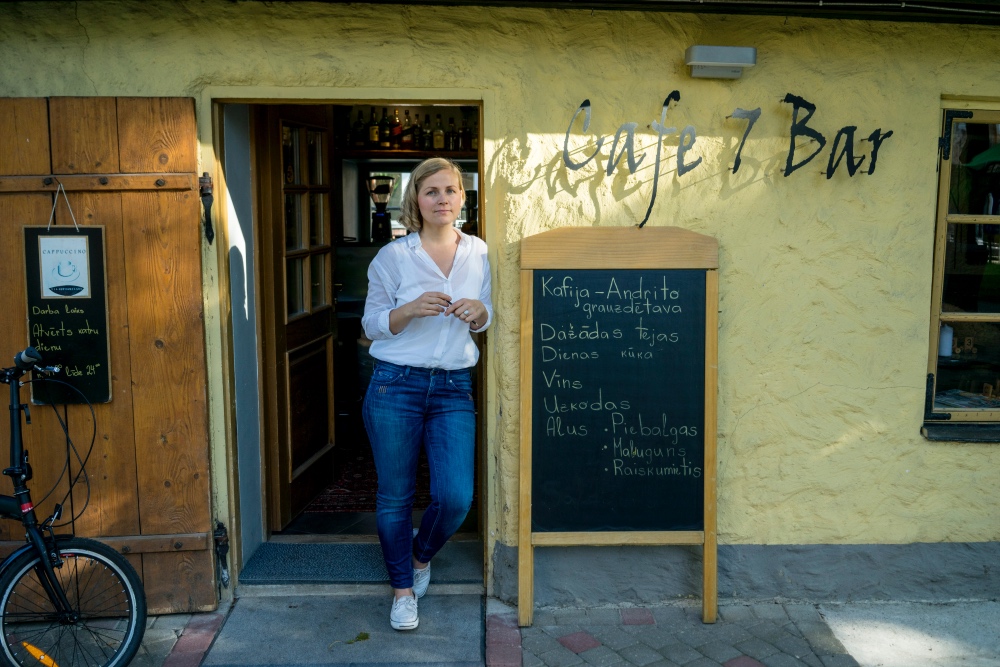 After spending 17 years abroad, Lelde received aid but from the local government instead of the state. Since all her savings were spent in Latin America, she needed to think how to start a new life back home. She applied for a grant “Do for Cēsis”, which is one of the ways the local government tries to support starting a small business. She received 1,500 euros to purchase tools for furniture restoration and started a company.

She rents space for her workshop inside the old vocational school in the center of the city. The local government turned the empty building into the center for creative industries. Now, Skolas6, the only co-working space outside of the capital city Rīga, is filled with the new entrepreneurs.

The local government doesn’t have any financial incentive to favor those who decided to return. However, while prime minister Māris Kučinskis (ZZS) said in 2016 that he wouldn’t be trying to get emigrants to return until he has something to offer, the city of Cēsis tries to stay in touch with those who moved abroad. The town mayor traveled to Ireland and the UK to meet with the Cēsis expat community, and now planning similar tour to Germany and Norway. The local government regularly email expats on what is going on in the city, including the available job vacancies.

“Would I not do this if it hadn’t been for the local government grant? The grant allowed me to start right away. They see there will be a future for this city if a person stays in Cēsis. They will give the person a fishing rod, rather than fish,” Lelde describes the attitude of the local government.

Former expats who decided to return say the main reason was a family, friends and a longing for Latvia. Lelde is the opposite: she feels a global citizen.

However, Cēsis gave her something special: natural fresh food, clear air and a walkable city with rich cultural life and the opportunity to work loan-free for herself.

END_OF_DOCUMENT_TOKEN_TO_BE_REPLACED

Illustrations and graphics: Lote Lārmane, Re:Baltica
Data analysis: Zane Vārpiņa, a demographer and
an assistant professor at the
Stockholm School of Economics in Rīga

The series are financed by State Culture Capital Foundation;
the statistical analysis was sponsored by Friedrich Ebert Stiftung, Germany.