Re:Baltica’s year in review and plans for 2018′ 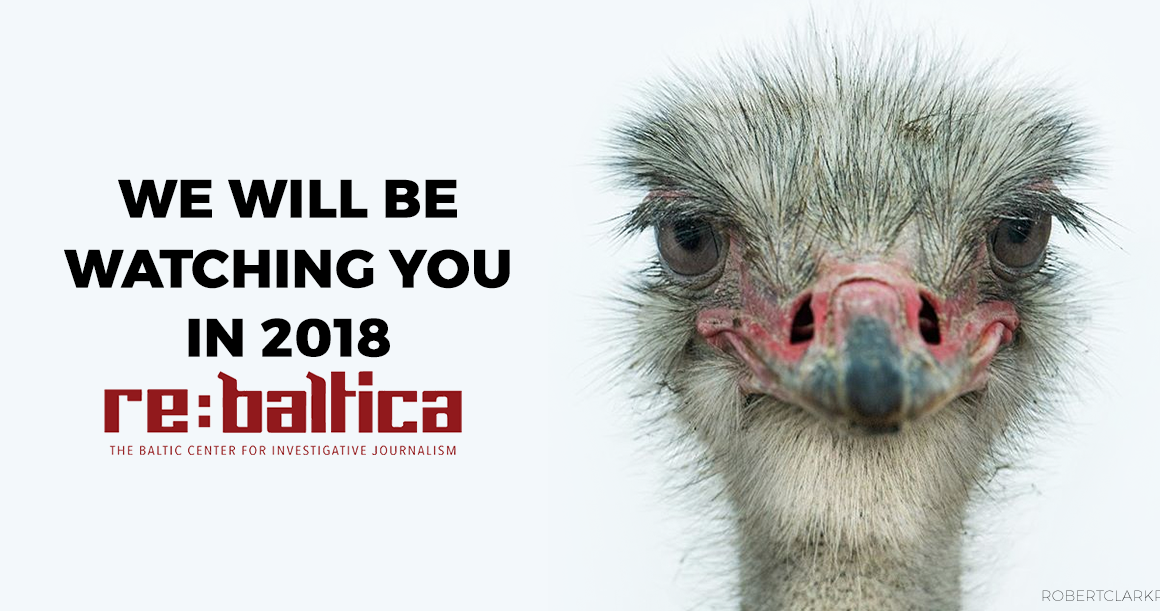 Concluding Re:Baltica’s sixth year in action, we want to tell you what we have done and what we plan to do next year.

1. Same old, same old. We continued to analyze the shortcomings in the Latvian education system, studying how the new teaching methods will be introduced in schools and what are the risks when doing so. Next year we will study the quality of education in Riga’s Russian schools.

We also didn’t let go of our fake news and propaganda research, revealing both how locals profit on fake rumors and how the net is contaminated by secretly founded and otherwise covered friends of the Kremlin.

In the field of money laundering, we collaborated with the French media magazine Mediapart for the first time, when a Latvian financiere turned out to be go-between for Marie Le Pen’s Front National and their shady Russian bankers.

We also launched a new series on Baltic spies that work for Russia – together with BuzzFeed News, we studied how Russia recruits Estonian smugglers, and we hope to finish the remaining parts of the investigation in 2018.

2. Lots of controversy. Thanks to the fact that the state decided to finance socially important content for the first time, we were able to start a large-scale investigation on demography. We analyzed five options. We expect the series on demography to continue in the second half of next year, if we will be able to find funding and a way to explain the dull, but economically viable term “productivity”.

3. Growing. Realizing that a big chunk of audience that the traditional media can’t reach, is spending time on Facebook and Twitter, and that it is time to distribute our materials just as professionally as we create them, we hired a full time social media editor – our wunderkind Lote, who can shoot and edit videos, design illustrations, process data sets etc. There’s enough money for a year. If you want to support this direction, we will be grateful for a donation.

We also received Google support to create a new fact-checking platform with our partners – IT start-up Toneboard. The first prototype of 4facts.org is currently under development. If anyone wants to participate in testing, let us know!

4. Having fun. We are well aware of the fact that some readers and viewers no longer use traditional media (or are too young to remember anything that existed before social media), but we want them to understand what’s going on in the country. Therefore, we were looking for new ways to get to them: with short videos of inspirational teachers, with stand-up comedy on fake-news from Russia, with pop-up magazines for politicians, cafeterias and libraries.

5. Earning money. As usual, in addition to donations and grants, we also earned money for Re:Baltica, teaching media literacy to SSE Riga students. Right now we are working on a MBA program in media management for professionals, because it’s important not only to investigate and report, but also find ways how to finance it and maintain people’s trust and attention.

For that we are grateful to you, Re:Baltica’s community. Stay with us, read and share, support us with advice and donations, and we will continue to do what we know best – investigating things that are important to all of us.

If you have any suggestions, ideas or reflections, feel free to let us know! May you have a successful and creative 2018!