A former top aide to Senators Lindsey Graham and John McCain is now working to help a leading Russian-friendly political party in upcoming parliamentary elections in Latvia, a small EU nation that has been a fierce critic of the Kremlin’s aggressive foreign policy.

Christian Ferry, who worked as a campaign manager for Graham and a deputy campaign manager for McCain, has been hired by Nils Ušakovs, the mayor of the Latvian capital, Riga, to provide him and his Harmony party with “strategic political advice, messaging, and polling concerning the October elections,” Ferry told BuzzFeed News and Latvian investigative outlet Re:Baltica in an email.

Ušakovs has been mayor of Riga for nine years and his party holds the most seats in Latvia’s parliament. But it has been shut out of national politics because of its perceived Kremlin-friendly position and Ušakovs’ ties with Moscow, with other parties shying away from forming a coalition with them.

Now, there are concerns that Ušakovs and his party have brought in an American face to smooth over the fact that they are pushing a pro-Russian position.

Ferry has experience in the realm — he previously worked as a strategic consultant at Davis Manafort, the lobbying company of former Trump aide Paul Manafort and Rick Davis, and did work for Viktor Yanukovich, the former president of Ukraine who was ousted in 2014 by a popular revolution and fled to Russia.

Ferry told BuzzFeed News in an email that he met Ušakovs in Washington “through a mutual friend, David Merkel. David was aware of my successful work in Latin America and Mayor Ušakov’s admiration of my two former bosses, John McCain and Lindsey Graham.” Ferry’s company, the Trailblazer Group, has worked for the past two years as a lobbyist for the government of Panama. Merkel did not respond to requests for comment. Ušakovs also declined to comment for this story.

Like Yanukovich in Ukraine, Ušakovs has walked a complex line in his position toward Latvia’s giant neighbor, appealing to the country’s ethnic Russian minority and maintaining warm relations with Vladimir Putin’s government, while at times voicing positions more in line with Latvia’s membership in the European Union and NATO. 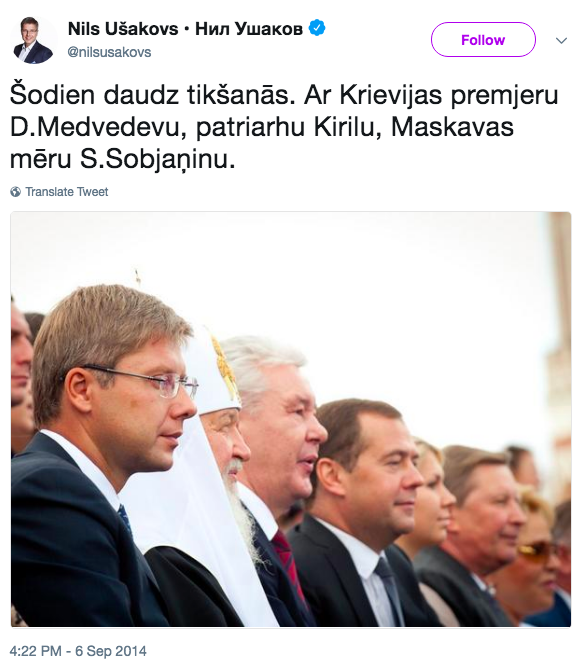 For instance Ušakovs has been a vocal critic of EU sanctions against Russia, put in place following the country’s annexation of Crimea and meddling in east Ukraine. He also would not criticize the annexation altogether and his party, Harmony, voted against a parliamentary motion that officially condemned Russia’s actions against Ukraine. A few months after that, Ušakovs flew to Moscow and posted photos of himself on Twitter alongside Russian Prime Minister Dmitry Medvedev, the head of the Russian Orthodox Church, and the mayor of Moscow.

Until fall 2017, his party, Harmony, had a cooperation agreement with Vladimir Putin’s party, United Russia, which he defended in the wake of the war in Ukraine as necessary to developing relations with Russia.

This has all been startling to a population wary of Russia, and concerned over increased meddling around the region and the world.

Ušakovs, who took over leadership of Harmony from a former high-ranking Soviet-era Communist, has more recently moderated its positions, forming alliances with fellow European Social Democratic parties in Germany and Sweden. (Forming those alliances prompted Harmony to end its agreement with United Russia.)

Ferry said he is working with Ušakovs’ because of the new positions, not his and his party’s long-term alignment with Russian interests.

“Being supportive of minority language rights does not equate to foreign alignment with that country,’ he said in an email. Ušakovs has been at the forefront of pushing for Russian language rights inside Latvia — a key issue for the country’s Russian-speaking population, which make up around 33 percent of Latvia’s 1.9 million people, but one that is fraught for a Latvian population that is still reeling from decades of Soviet occupation.

Ušakovs is no stranger to Washington — he met both McCain and Graham during two separate trips to the US capitol in 2017 designed to boost his pro-Western credentials. On Dec. 19, he hosted a dinner at the DC restaurant Mirabelle for foreign policy specialists and thinkers as described by one of the attendees.

The invitation to the dinner, sent out by Merkel, characterized Ušakovs as an “an impressive guy and a central figure in Latvian politics.”

According to one dinner attendee, Ušakovs used the event to highlight that he is pro-Western, pro-NATO and pro-European. “He said that because he is so pro-Western, he has alienated some of his constituents and sometimes has to moderate his public opinions,” the attendee said. Ušakovs also said that he is creating a party that is above nationality divisions, the attendee said.

“I am aware that some people have great doubts about him and they think Ušakovs is a Trojan horse for Russia,” the attendee said. “But I must say he made a very good case for him. He did not make arguments that made me suspicious or uncomfortable.”

END_OF_DOCUMENT_TOKEN_TO_BE_REPLACED

Written by Inga Spriņģe, Re:Baltica
Holger Roonemaa contributed to the story.
This material was written in cooperation between Re:Baltica and Buzzfeed.com