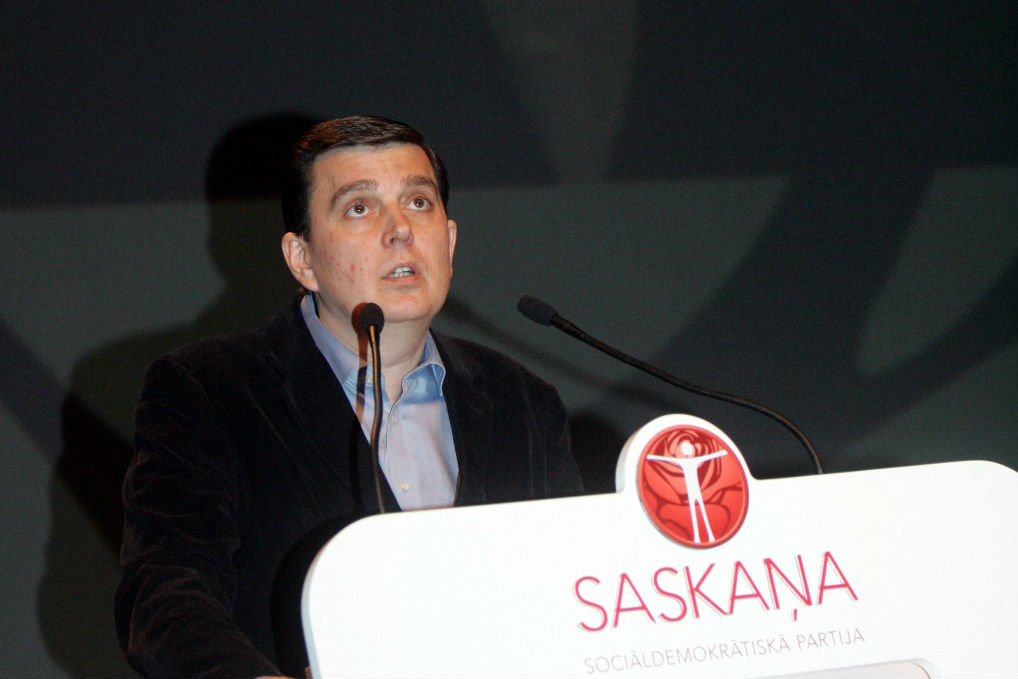 A major donor of Latvia’s biggest pro-Russian party Harmony has received payments from offshore companies used in the Magnitsky affair and the Azerbaijani laundromat, but says he cannot remember a thing about it.

One of the largest contributors and board member of Latvia’s leading pro-Russian party Harmony Aivars Bergers has received EUR 270,000 from two offshore companies used in well-known international money laundering schemes, a data leak of the transactions between Danske Bank and Swedbank shows.

The transactions were leaked to the Swedish public broadcaster SVT who partnered with Re:Baltica to examine the Latvian beneficiaries. Some USD 5.8 billion in suspicious transactions flowed from Danske Bank, which is suspected of money laundering, through Swedbank’s Baltic subsidiaries. Swedbank has denied accusations of money laundering.

Over approximately six months in 2010 and 2011, Bergers received transfers from Danske Bank to his account in Swedbank from two “post box” companies registered in Great Britain:  Diron Trade LLP and Murova Systems LLP. The first was used to transfer money in the massive Russian tax fraud uncovered by the late Sergei Magnitsky, the second in the “Azerbaijani laundromat” through which the Azerbaijani elite siphoned millions of dollars from the country to buy luxury goods and real estate abroad.

Harmony, which is the favourite party of Latvia’s sizeable Russian-language minority, gained the most votes in the Latvian parliamentary elections but, as per usual, was left in the opposition because of its perceived pro-Kremlin stance in foreign policy. Under the leadership of its popular and charismatic leader Nils Ušakovs it has ruled the capital, Riga, for the last decade, but currently is embroiled in corruption scandals and accusations of cronyism. Bergers has been Harmony’s board member and mega-donor for almost as long.

The money sent to him from both offshore companies was transferred in four payments. For two of the payments, the listed purpose was “for building materials” and the remaining two refer to the same invoice, though a different amount from each company.

Bergers told Re:Baltica that he didn’t remember these transfers and would have no comment. He no longer has accounts in either bank, and therefore, allegedly, cannot check anything. “I am not convinced by your viewpoint that I should give you information because I am a public person,” Bergers said in a telephone interview.

At the time of the payments, he was a member of the board of the municipal construction enterprise Rīgas pilsētbūvnieks, as well as a stakeholder in the privately-owned Inko Fish, which trades in canned food, and N2, which produced TV broadcasts and films.

Since leaving Rīgas pilsētbūvnieks in 2011, Bergers has been active in business as a stakeholder in at least 24 companies, according to the company register’s database Lursoft. He was a minority shareholder of VEF banka, shortly before its license was annulled in 2010 due to money laundering. At the time of the payments Bergers also worked as an insolvency administrator, but as such was not required to declare his income sources.

Hiding behind a party member

Berger is one of Harmony’s biggest donors. Since 2005, he has given the party more than EUR 140,000, according to the public party financing database. He also generously donates to two NGOs supported by Harmony, young.lv and 9.maijs, which are among the organizers of the controversial celebration on May 9 in Riga. The event is supported by Riga’s municipality and brings together an estimated 100,000 local Russian speakers celebrating the victory in WWII, stirring painful memories among Latvians who see this date as the beginning of Latvia’s second occupation by the Soviet Union.

Bergers donated to these organizations in his own name and using that of another party member, according to the court documents reviewed by Re:Baltica. Hiding behind someone else is illegal for the donations to political parties, but there are not similar restrictions regarding NGOs.

Between 2014 and 2016, Bergers donated EUR 14,700 in his own name to both organizations, but gave EUR 53,400 to fellow party member Riga city councilor Maksims Tolstojs, asking him to donate the money under his own name. 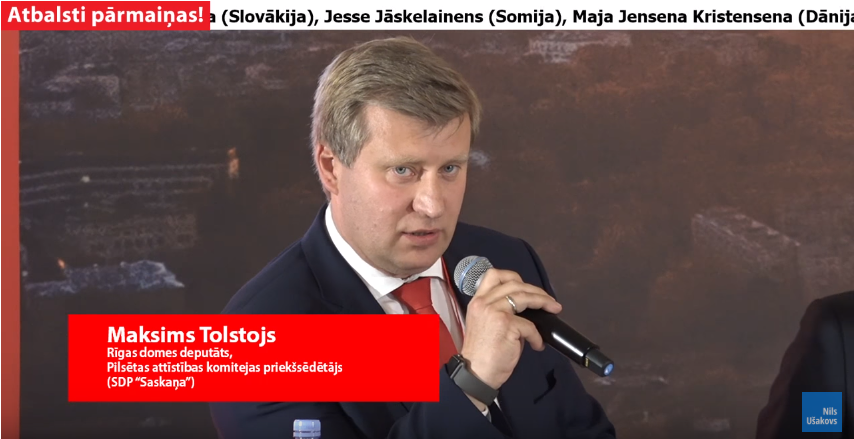 Photo: Screenshot from the Harmony Congress in 2018.

At the time, Tolstojs was personally bankrupt. Re:Baltica found an account of the events in his bankruptcy file. His creditors were not pleased with the donations at a time when he had yet to repay his debts, therefore turned to the courts. The politician justified his actions saying it was not his money and that Bergers had asked him to donate.

No evidence was presented to the court to show that Bergers had transferred the funds to Tolstojs. Bergers refused to answer Re:Baltica whether that meant that he gave the money for the donations in cash. In his defense, he said Inland Revenue (VID) examines donations to NGOs and no violations have been found.

Bergers, asked about the origin of funds for his political contributions, reacted angrily.
“You really think that Latvia’s anti-corruption agency is not able to examine donations by persons to political parties, as required by law?” he said. Instead of answering, he threatened to ask law enforcement to determine how journalists learned about the payments. “I don’t like the tone of your questions,” Bergers said by phone.

The leader of Harmony’s parliamentary faction, Jānis Urbanovičs, referred questions to party leader Ušakovs, who is responsible for the party’s finances. “Bergers is a member of the [Harmony] board, his discipline has never stumbled, and he always comes to board meetings. That is where I meet him, nowhere else,” said Urbanovičs.

Ušakovs, via his press secretary, insisted that the Corruption Prevention and Combating Bureau of Latvia (KNAB) examines all donations and said he knows nothing about Berger’s sources of income. “Given that KNAB has not discovered anything wrong, I assume it’s legal.”

Currently, Bergers is a stakeholder in two companies. According to the description found in the Companies Register, one of them – ARIF Group – provides legal services. The other – Tērbatas biroju nams – rents real estate. Both have had no revenues in recent years, and Tērbatas biroju nams has a tax debt of more than EUR 12,000.

The other stakeholders or procurators in both enterprises have been foreigners from China, Vietnam, Armenia, and Azerbaijan. This is characteristic of companies that have been used to get residence permits in Latvia in exchange for a EUR 50,000 -100,000 investment in the shares capital. Bergers refused to comment to Re:Baltica whether this was the case.

For example, Russian citizen Sergio Men appears in both companies. A person with the same name and passport number is a stakeholder in the company EURASIA STRATEGIX PTE, registered in Hong Kong. As a representative of this company, he spoke at the Asian Financial Forum and the biography submitted for the event was impressive.

He started his career in the mid-1990s in a construction firm under the supervision of the Russian president’s office. Later, he consulted for international companies about the Russian and Kazakhstan markets until he moved to Hong Kong in 2003, where he kept consulting about the gas and oil markets. He also consulted for various Chinese government organizations. His CV states he studied economics and finance at Hong Kong University and the Russian Military Academy.

This Russian citizen has no other businesses in Latvia besides the Berger’s companies.

Among the procurators for ARIF Group in 2015 was also Viktor Timchenko from Ukraine. His birth date coincides with a person who at that time was running for office in municipal elections in the small Ukraine city of Kamianets-Podilskyi. Before that, he managed the city’s local branch of Privatbank. This bank is regularly mentioned in money laundering scandals. Timchenko, too, has no other business in Latvia, according to the Companies Register.

The Latvian State Security Service (VDD) confirmed to Re:Baltica that at least some of the stakeholders in Bergers’ companies had once been granted residence permits in Latvia, but declined to name the persons.

In business with Azerbaijani millionaire

Re:Baltica has learned that one of Bergers’ biggest business partners, the Azerbaijan citizen Zenyal Mammadov, had a residence permit around 2014. Bergers and Mammadov are co-owners of ARIF Group, while four other companies belonging to Mammadov have been closed. 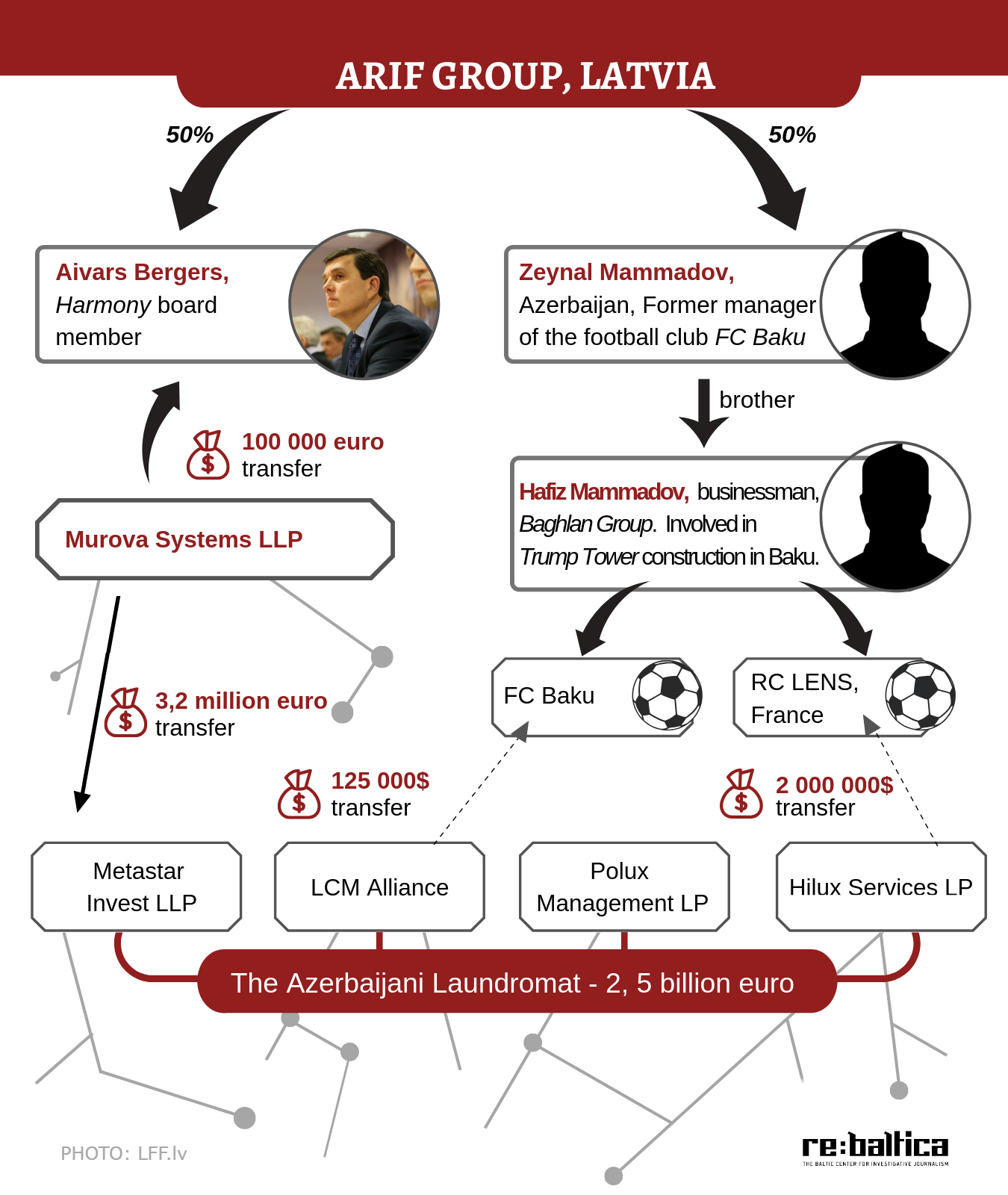 Re:Baltica has determined that only one Zenyal Mammadov with the same birth date as the one involved in Latvian companies can be found in the Azerbaijan’s register of voters. 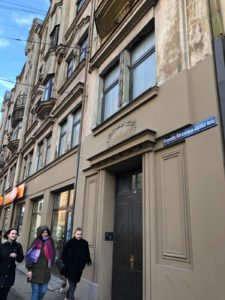 The company ARIF Group which is jointly owned by a Harmony board member Aivars Bergers and the Azerbaijani businessman Zenyal Mammadov is registered in an apartment in the center of Riga. No one opened the door for Re:Baltica.

He was the manager of the Azerbaijani football club FC Baku. Mammadov told the Azerbaijani press that the owner of the club is his brother, the multi-millionaire Hafiz Mammadov. Hazif Mammadov owns Baghlan Group (construction, oil, gas). According to international media reports it was involved in the construction of Trump Tower in Baku and regularly gets contracts from the Transport Ministry, which is not possible without close ties to the family of Azerbaijan President Ilham Aliyev’s family.

Re:Baltica’s partner OCCRP discovered that Mammadov has used at least two of four British “post-box companies” (that do no real business) that were at the center of the Azerbaijani elite’s money laundering scheme. Around EUR 2.5 billion were pumped out of the country through them.

In 2013 FC Baku bought a player from a Romanian football team through one of the companies.

The other offshore company was used to financially support RC Lens, bought by Mammadov, which is one of France’s oldest football clubs.

Bergers also has a connection to Metastar Invest LLP, one of the four core offshore companies on which the Azerbaijan money laundering scheme was based. In a tangled scheme of payments, this company received at least EUR 3.2 million from another British company, Murova Systems LLP, which transferred EUR 100,000 to Bergers. The transaction order only had the account number. Soon, Murova Systems LLP was liquidated.

Re:Baltica’s efforts to contact Zeynal Mammadov were unsuccessful. Bergers pointed out that the Azerbaijani businessman didn’t want to talk to the media. No one answered the door at the apartment in Riga where the ARIF Group is registered.

According to information available to Re:Baltica Mammadov has not renewed his residence permit in Latvia.

Correction: On March 25th it has been clarified in the second paragraph that Murova Systems LLP was used in so-called Azerbaijani laundromat, but Diron Trade LLP in Magnitsky affair.

Correction: On Sep 18, 2019, Re:Baltica received Berger’s request to recall seven statements in the text which he considers defamatory. Re:Baltica is correcting one of them. We wrongly stated that since leaving the board of Riga city’s enterprise in 2011, he has been co-owner in at least 24 companies. In fact he has co-owned 23 companies in total, but since 2011 has been an active owner in three, according to the Lursoft data. In additional, the story states that he has donated significant sums to Harmony, when in fact he has donated to three political formations which are either founding members of Harmony or where Harmony is member itself. So they are interrelated donations and term Harmony alone was used for a simplification of the text. This explanation does not change the essence of the original statement regarding donations.

END_OF_DOCUMENT_TOKEN_TO_BE_REPLACED

INDEPENDENT JOURNALISM NEEDS INDEPENDENT FINANCING
If you like our work support us!
Konts: LV38RIKO0001060112712