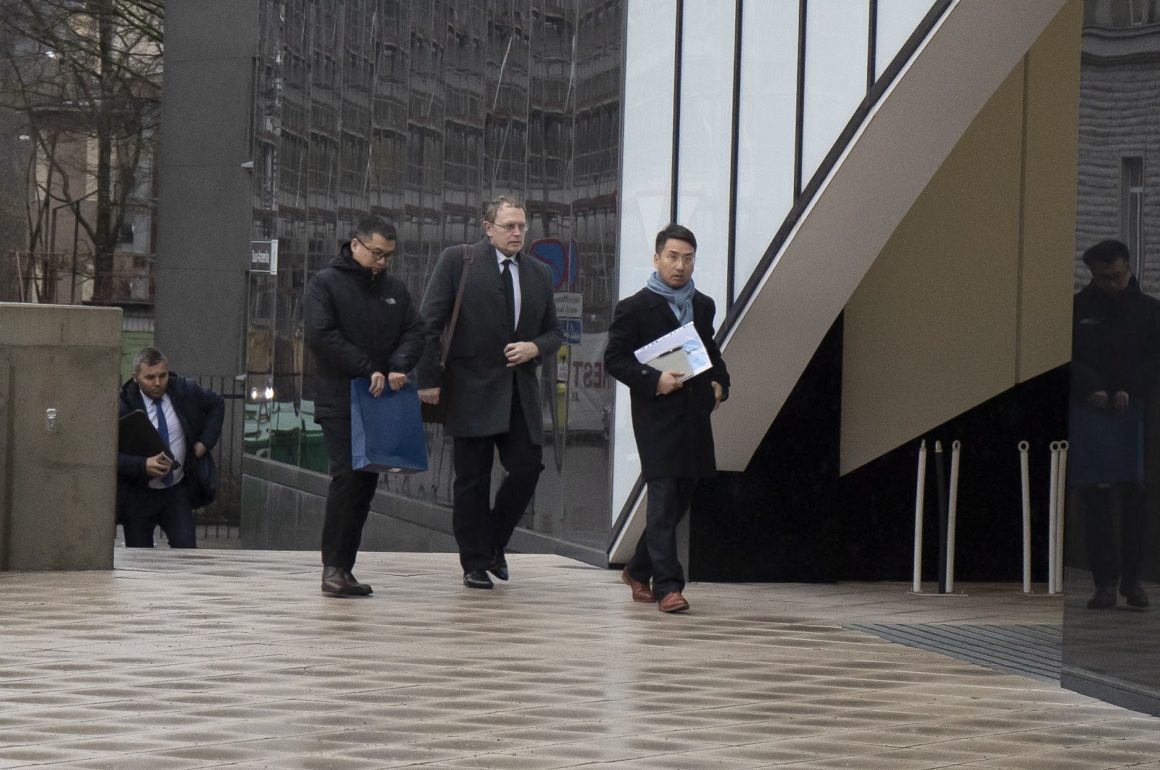 Battling to stay in the competition for building Estonia’s 5G network, the tech giant Huawei has hired a lobby firm with three ex-ministers on board in an attempt to use their political influence and push back the decision to exclude the Chinese company due to security concerns.

Estonia was expected to adopt a regulation that would effectively ban Huawei from supplying their equipment for the Baltic country’s 5G network last autumn, as reported by Re:Baltica earlier. According to the draft of the government’s decree at the time, the Consumer Protection and Technical Regulatory Authority (TTJA) would have to approve the 5G technology, but it would need to seek opinions from the Estonian counterintelligence agency KAPO, the Foreign Intelligence Service and the Information System Authority to do so. If any of the security agencies would deem 5G technology as vulnerable or possibly having backdoors which would allow to collect users’ data, it wouldn’t be allowed.

However, the Justice Ministry unexpectedly decided that the proposed governmental decree would be unconstitutional. In order to adopt the new regulation, the Electronic communications act would have to be changed first.

This decision gave Huawei at least a few extra months to fight the regulation.

And they have been using it well. The Chinese tech giant has hired the PR and lobby firm Powerhouse, which has three former ministers of recent Estonian governments on the payroll, to try and stop the initiative. The company is led by a seasoned lobbyist Janek Mäggi; he served as the minister of public administration until April 2019 in the government led by the current Estonia’s Prime Minister Jüri Ratas.

Mäggi also ran for the parliament in 2019 general elections from the Center Party list, but didn’t get elected and, as a result, returned to Powerhouse, which he co-founded. Over the following months he invited two other recent ministers to join the firm.

One of them, Marko Pomerants, is still a member of the government coalition Isamaa party and councilor of the provincial town of Rakvere. Pomerants has held a number of ministerial jobs, including the position of Minister of Interior. He lost his position as the Minister of Environment and left the government following internal party shuffles in 2017. Another political heavyweight in Powerhouse is a former social democrat Andres Anvelt. He, too, has been a minister in several governments, with the last position being the Minister of Interior, from which he resigned in December 2018.

For the last two months, primarily Pomerants (but also Mäggi) have worked hard to open the government doors for Huawei. Delfi and Re:Baltica have learned that Pomerants has been instrumental in setting up meetings for Huawei with Isamaa politicians, including a meeting with the Minister of Foreign Affairs Urmas Reinsalu in January and one with the Minister of Justice Raivo Aeg on February 13, 2020.

On the same day, Pomerants together with the Huawei delegation met the Estonia-China parliamentary group.

Huawei also has a meeting with the minister of defence Jüri Luik (also Isamaa) scheduled for March. Other meetings have included the minister of economy Taavi Aas, the minister of IT Kaimar Karu and deputy head of the parliament’s committee of economic affairs Kristen Michal. 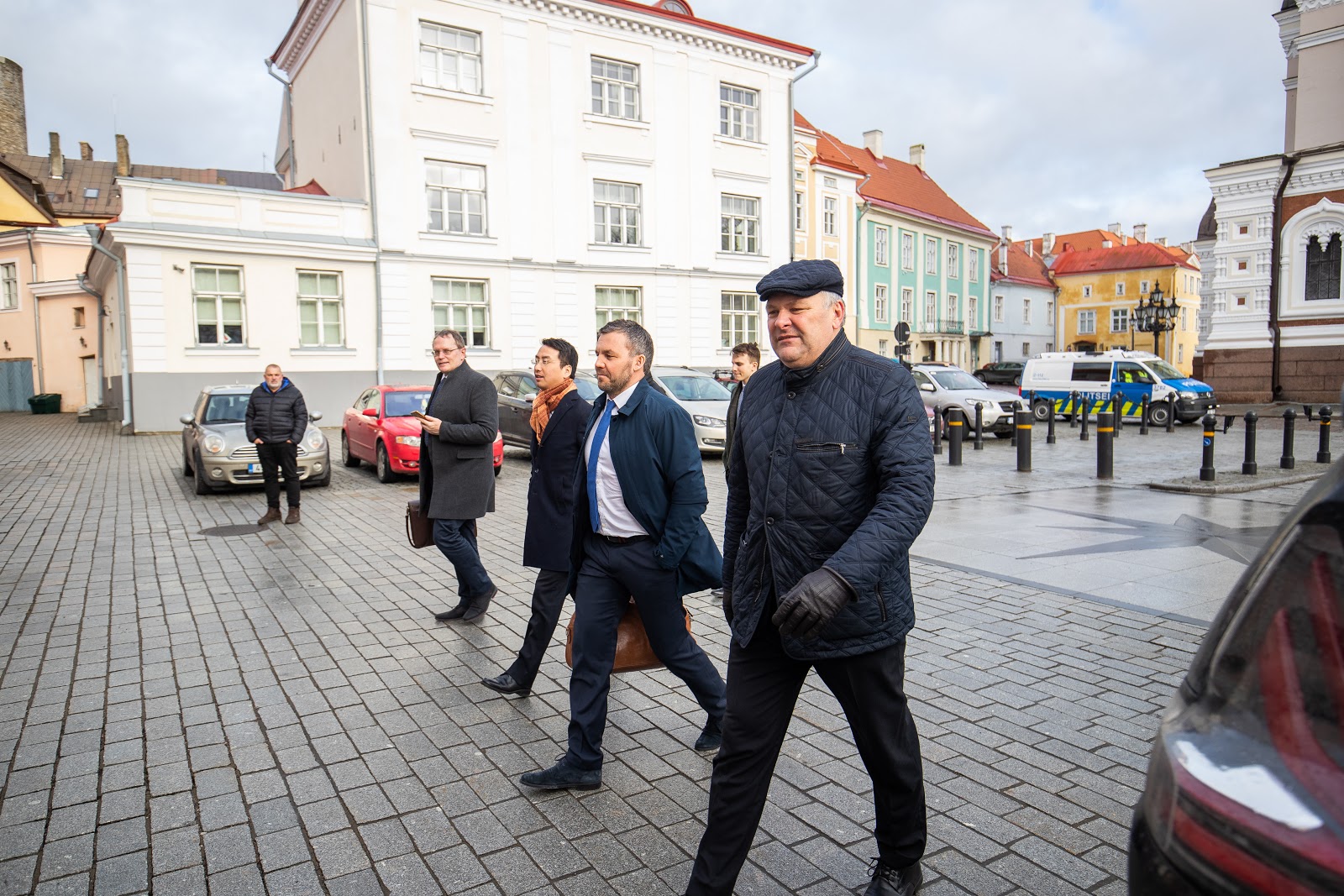 Marko Pomerants (first on the right) and Kenneth Fredriksen, Executive Vice President of Huawei (second from the right), were part of the delegation that lobbied the Estonia-China parliamentary group on Feb 13. Photo: Kretel Kuusk / Ekspress Meedia

Huawei’s late lobby push coincides with the annual security environment assessment published by the Estonian Foreign Intelligence Service only this week. “We need to think about what information, if any, we want to share and whether the risks are mitigated. This is especially so with increasingly widespread technologies like smart cities, 5G and artificial intelligence applications,” it stated under the chapter titled “Hidden dangers of Chinese technology”.

“For a digital nation like Estonia, communications networks are a vital piece of infrastructure, and all the risks associated with the technology used need to be considered. Small countries are an easier target for China to build dependency and exert pressure later,” the intelligence service warned.

There is no lobby regulation in Estonia and neither the stakeholders or politicians need to keep a log of their meetings and interests.

“I can’t change the fact that they are [my] party mates,” Pomerants told Delfi and Re:Baltica.

Pomerants claimed he is “just a part of the team” that Huawei has asked to help them “to talk about their problems to various people”. “Neither Powerhouse nor I personally are doing anything that could damage Estonia’s security. That would be absurd,” he said.

The draft law will pass the first hearing in the Estonian parliament this week. After that, members of parliament will be able to submit their suggestions for amendments. Sven Sester, the head of the parliament’s economic affairs committee, said that all stakeholders – including Huawei – would then be invited for discussions. Sester, who is also the deputy chairman of the China parliamentary group, himself declined an invitation to meet with Huawei lobbyists in January.

Ahead of parliamentarians, Huawei, with the help of Estonian law office Cobalt, has already filed their official position. Their eight-page letter calls the proposal as being against fundamental rights and a damaging overregulation that would leave decisions which technology to allow or ban as self-will of selected state officials. The letter, signed by the Cobalt bureau’s senior partner Sten Luiga, claims that barring Huawei from the Estonian market would cost the telecom sector 300 million euros.

One of the reasons the Western intelligence services regard Huawei as a threat is the Chinese national intelligence law that requires organizations and people to collaborate with the intelligence services. Surprisingly, the Huawei’s letter to Estonian parliament claims that no such requirements exist. “There is no law in China that would allow the Chinese state to demand the telecommunication producers to gather intelligence, leave backdoors in the devices or switch off the communications networks of the clients. The Chinese government does not intervene with our business or the security of our products.”

Regardless of the last minute effort, chances to succeed are evaluated as “slim, if not non-existent,” according to Andres Reimer, another counselor at Powerhouse.

Contrary to Estonia, no Huawei lobbying activity has been evident in neighbouring Latvia.

Both the Prime Minister and the Ministry of Transport, who is responsible for the telecommunications industry, told Re:Baltica that they had not met anyone or heard anything from Huawei recently. And there is no reason to do so, given that Latvia has not tried to limit Huawei’s involvement in the development of the 5G network. Authorities stated that they have assessed the cybersecurity risks of 5G and concluded that there is no legal basis for imposing restrictions on the use of Huawei technologies in the development of the 5G network.

Last week, the United Stated charged Huawei with several accounts of theft of intellectual property, racketeering and a conspiracy to steal American trade secrets. The indictment listed six companies from whom Huawei had allegedly stolen code, manuals and other trade secrets.

Also, in the annual Munih security conference, the US defence secretary Mark Esper warned that US alliances, including the future of Nato, were in jeopardy if European countries let Huawei in their 5G networks as Americans could not be sure of their safety.

The charges go back to as far as 20 years ago. One of the episodes happened in 2004 at a Chicago trade show. The indictment says that a Huawei employee “was discovered in the middle of the night after the show had closed for the day in the booth of a technology company … removing the cover from a networking device and taking photographs of the circuitry inside.”

Huawei denies charges and describes them as part of the ongoing American campaign against the company.