The Other Side of The Railroad 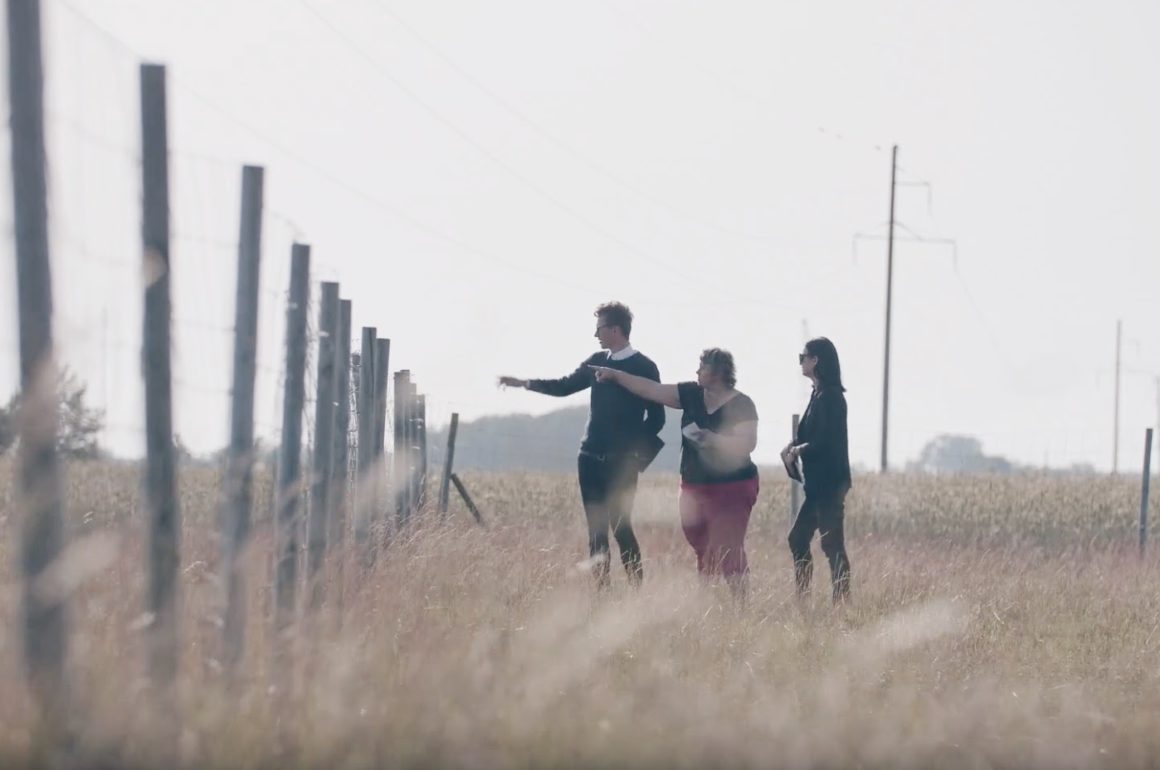 The land expropriation is an essential part of the high-speed train line Rail Baltica (RB), but Latvia and Estonia lag behind the schedule. It is another risk for timely finish of the project

“We are here, the railroad goes there, the house and the barn stays on this side, but the sheep pasture – on the other,” farmer Anita Damsone draws the route of Rail Baltica (RB) while standing in the middle of a field in Salacgrīva county, approximately 15 kilometers from Latvia’s border with Estonia. Anita breeds sheep. It was five years ago when she learned that a high-speed train will ride through her land. The map with the planned route she got only upon her own request. No one has explained to Anita how she will be able to get from one side of her property to the other when the railroad is there. Nor has she heard anything from a project representative within the past five years.

“Nobody communicates. I gather information myself, but I’m afraid that I will miss out on something,” says Anita. “Maybe I can apply for a crossing to get to the other side of the property, but not knowing about such an opportunity I’m not asking for it.”

“Each generation needs to sacrifice something. Compared to what our ancestors sacrificed, this is a small thing,” she concludes. In conversation with Re:Baltica Anita repeatedly stresses that she is happy – her granddaughter would not need to rent an apartment in Riga, she would be able to board a train in the morning, commute easily to the university, and return in the evening. It would finally be convenient to get to opera, without spending hours on the road. Anita’s affirmations depend on a promise that once was told during public consultation: that there will be an RB station in Salacgrīva.

For now, Salacgrīva’s regional station has been pinned only in uncertain future plans. It’s unclear when and if it will become true.

What Anita does not know is that on the other side of the border, at Silla village near Pärnu, is someone exactly like her. When landowner Ellen Hunt hears the words “Rail Baltica”, her voice suddenly changes. For the last five years she has been looking at those as an axe hanging over her head. “I don’t want to get upset again,” she says.

According to plans, RB will cut her home, Kurejõe farm, in half. The arable land will be on the other side of the railway. She does not know how she’ll be getting there after the construction. Like Anita, Ellen does not know much at all, to be fair.

Initially, the railway line was drawn directly through Ellen’s house. According to the latest information, now the railway runs 50 meters from the building.  The exact route has changed again and again.

In recent years, life seemed to have returned to normal. Ellen had forgotten about RB until Re:Baltica reminded her. She has not heard from coordinators for years. “Maybe this means that the railway won’t come after all?” she asks in a voice, full of hope.

The fact is that it will. The first Estonian section of the new railway will be built at Rapla-Pärnumaa and the works should start this year. RB coordinators are actively focusing on that area: explaining what will happen, buying land, meeting residents.

Both Latvia and Estonia are behind the schedule acquiring land necessary for the biggest infrastructure project to be built in the Baltics since the collapse of the Soviet Union. Lithuania, in turn, is proudly showing off how it has done it all already. It happened with the help of controversial law amendments, which allowed the state to cut pieces off private properties as it sees fit. Some owners went to the court where it was disclosed that the compensation for land on average run a little over 1000 euros per property. They all lost.

Lithuanians like to brag about its progress with RB as the state allegedly got all but one of 1346 plots under state control.  It was possible due to recently adopted legislation that made land expropriation way faster and easier than it used to be, but which Lithuanian MP Simonas Gentvilas (Liberal Alliance) described as one which may lead to people being “disappointed in their country” due to unfair compensations.

Current minister of internal affairs, Rita Tamasuniene, also criticised legislation as MP because it gives the state the right to cut a slot in pieces and leave owners with tiny patches that are “impossible to use”. “We do not respect our people,” she said in the parliament in March 2019.

Several court cases, reviewed by Re:Baltica/siena.lt indicate that the concerns were legitimate. The compensation  rarely exceeds 1000 euros, mostly depending on the size of the land plot being expropriated.

Landowners usually complained about the size of the compensation or the state’s ability to slice their land in chunks, making it hardly usable, especially for farmers. However, there is not a single case where the landowners won.

In 2019, Ardi Rego bought a new home in Mälivere village in central Estonia. 75 people live there and they will feel RB effect directly as it cuts through the sleepy village.

In Ardi’s case, its not just village. Few weeks ago, as RB organisers were introducing the last developments in a meeting with locals, Ardi got to know that the line, which previously was next to his property, is now going straight through it. The noise barrier would be a few meters from the house.

Ardi couldn’t believe his eyes. “Until recently I was sure my property was safe,” he explains. “Now it’s pounding in my head night and day – what will happen to my home now? At the moment, I don’t know the answer.”

He is not the only one who is in despair – the whole village is. Jaan Pelmas has been living there for over 40 years. “They’ll be taking 3,000 square meters from me,” he says. “Nobody will pay for the decline in quality of life. Only for my square meters.”

Initially, it was thought that more properties will have to be demolished, but now the redesigned route means the number is down to two. One of them is indeed in Mälivere. Re:Baltica was not able to contact the owner, but Roland Müür, environmental manager of RB Estonia, met him last week. “He just wants to be done with the process as fast as possible,” Müür said.

The Land Board of Estonia has also heard rumors of people selling their lands without giving notice to new owners of the land’s inevitable future. Although it has remained a rumor, Rego’s experience seems to be confirming that a notary didn’t explain any possible outcomes of the land’s future when he was buying it.

Since the start of the project Estonia has managed to expropriate on average about five plots per year. Now, taking into account predicted construction speed, one property shall be processed in at least every two days. Which may turn into problem, as in reality it takes on average a year for a property to change hands with surveying, evaluations etc and market of geodesists is very limited. Besides, recent law changes meant that current licenses for surveyors will be valid until July 2020. After that they need to apply for a new licence, pass the exams, and that could mean delays.

One of the properties that the state needs to buy out is Titanic, a shopping mall situated by Riga’s central bus station and reminding of 90’s in all its glory. The owners have been quarreling with the state for some years now as they believe that what is being offered for their property – the mall and the car park exit – is too low.

In addition, they claimed that because of RB they won’t be able to fulfill their dream – turn Titanic, which is known as a place where to buy counterfeits of well-known brands, into a hotel. Initially, owners of the shopping mall requested compensation for this loss. “We can’t place a price on visions,” says Aigars Lipčiks, real estate expert at the legal department of local implementer, EDZL, European Railroad Lines, as there was no preparatory work done by the owners to turn their dream into reality.

Both sides of the dispute say that they could go to court to defend their rights. That does not mean, however, that rails will not be laid. If both sides won’t reach an agreement, then the property will be expropriated forcibly and afterwards the court will decide on the amount of compensation.

The process of expropriation has been delayed also due to what the state auditors described as “unforgivably slow” work of the Transport Ministry which, for example, took two and half years to push through the government simple technical changes in regulation.

The Ministry says that things haven’t been moving as fast because it lacks resources. The exact RB route still has not been set, therefore hindering land expropriation process. At the same time, it would not be cost-effective to buy properties not required. In addition, all properties will need to be maintained until the start of the construction, which won’t happen before 2022.

“We could send letters that nothing is happening as of yet, but that way I will only annoy people,” Rita Voronkova, spokeswoman of EDZL, concludes.