Who Is Afraid Of Rail Baltica? 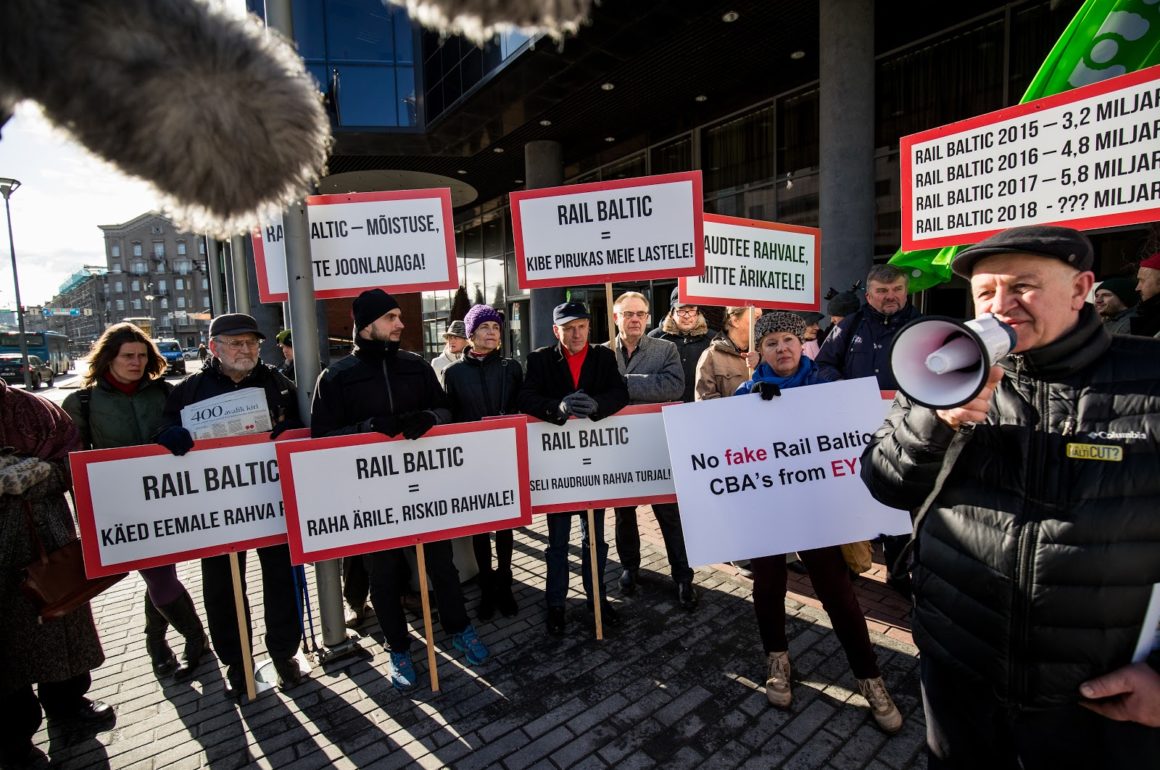 The opposition to the Baltic high-speed railway line is the loudest and most political in Estonia, while in Latvia and Lithuania it is mostly desperate landowners.

“For Estonia the risks are the highest and the gains – the smallest,” says Priit Humal, the head of opposition group Avalikult Rail Balticust (ARB, Publicly About Rail Baltica).

This non-profit has been the most active and outspoken critic of Rail Baltica (RB) since 2014, coordinating public protests, collecting signatures, filing court and data protection cases, bombarding the project coordinators with emails.

In December 2019, ARB together with another non-profit, Eesti Looduskaitse Selts (Estonian Nature Conservation Society), finally scored a victory when Estonia’s Supreme Court decided to hear their appeal against the local planning authority. Out of seven appeals this is the only one which has been granted, the other six were dismissed or settled.

RB Rail claims ARB is a commercial competitors’ pressure group, not an impartial citizens’ initiative. That’s because a businessman Karli Lambot, who owns about one third of the shares in freight forwarder company Ace Logistics (which mostly carries goods by trucks), has been actively involved with ARB. Lambot has personally donated money to ARB to cover the costs of legal aid and printed materials.*

Lambot argues that his logistics company could actually benefit from RB as his firm uses all forms of transport, including railways. “For the rest of the society it would be unfair, as the cost of the railway for them would be much higher than the win for us,” he says.

Political opposition is in power

When Isamaa, the Conservative People’s Party (EKRE) and the Center Party formed a government last spring, a legitimate question arose whether there still is political support to build RB.

In Estonia, parliamentary parties can distribute a certain amount of budget funds for so-called regional investments or quotas for which there is no transparency and which often are awarded to the organisations linked to parties themselves. Using this practice, in 2018, Isamaa donated EUR 15 000 to ARB for “research and dissemination activities”. This attracted attention because the leader of the non-profit, Priit Humal, is also a member of the Isamaa party.

Humal explains that ARB has considerable legal costs due to litigations against RB and part of them are funded by private donors. Parliamentary subsidy was used to print materials and produce animated videos for an online campaign. The prints were so glossy that it was rumored that Russia could be behind the opposition, but there has been no proof of foreign interference.

Right-wing populists EKRE have been more unambiguous. In 2019, EKRE gave EUR 5000 from the same budget funds to ARB for “operating costs”. During the coalition talks last March Mart Helme, the chairman of the party and current interior minister, explained that EKRE was looking for ways to stop RB. However, this pledge was not included in the coalition agreement. Since taking the office EKRE has been quite silent on the matter.

Still, the political situation is uncertain and project coordinators in Estonia do not have guarantees that there is actual political support to implement the project without obstruction. RB Rail counts both parties, Isamaa and EKRE, as an opposition to the project. However, political parties have no clear leverage to intervene as the more important decisions have already been made.

No Big Objections in Latvia or Lithuania

Latvia has not seen massive protests against RB. During the planning process the most vocal groups where the owners of the properties which the new railway line will cross. As a result, the exact line was amended in both the capital and the regions, for example, moving it further away from the places where people live. The only NGO protesting against it was Vides aizsardzības klubs (VAK, The Club For Nature Protection”) who called for the project to be dropped altogether. Their reasoning was that Latvia shall stick to modernization of the existing train lines and the damage to nature by building a new one will be bigger than potential gains.

Another issue has been a question whether RB is economically viable. The representatives of the transit business doubted the estimated increase in cargo volumes and argued that potential future demand can be met by existing road lines. The previous leadership of Riga’s airport claimed that the planned railway line extension to the airport will not bring much value (currently airport is serviced by buses and taxis). However, the objections were expressed at the beginning of the project. At this moment, there is no visible opposition.

Situation is similar in Lithuania where no major political opposition to the project exists. The only group which is not satisfied are the landowners because the law was amended in the way which allows state to cut part of their land for an arguably small fee. Several of went to the courts – and lost their cases. Lithuanian MP Simonas Gentvilas (Liberal Alliance) said in debates that the new regulation may lead to the people being “disappointed in their country”. *

*Article was amended on Feb 17 to reflect the fact that Lambot is minority (34%) shareholder of Ace Logistics, not the sole owner.