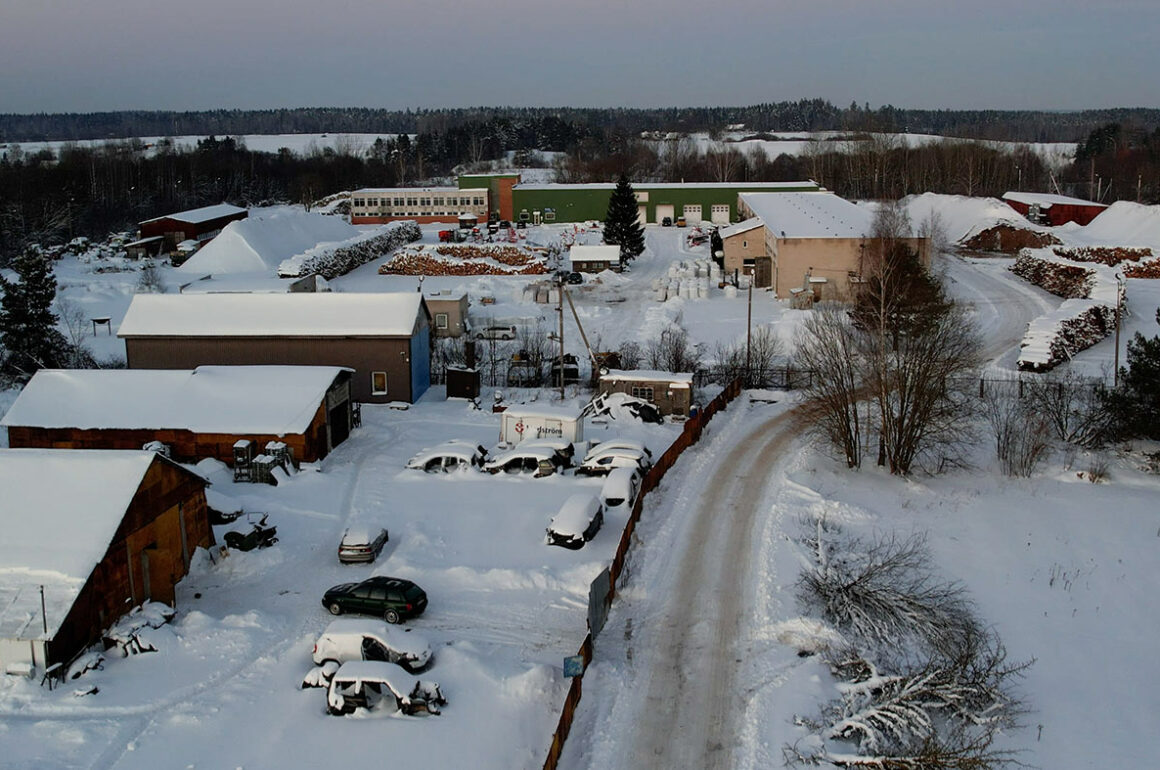 Not long after imposing sanctions on wood imports from Russia and Belarus, Europe saw an influx of wood supposedly coming from Kazakhstan and Kyrgyzstan. Authorities say sanctions-busters are increasingly mislabeling wood as Central Asian so they can keep bringing it in to the EU.

When the European Union banned imports of wood from Russia and Belarus — two of the bloc’s top suppliers — in response to the invasion of Ukraine, the measure promised to wipe billions of euros from their budgets.

But a new investigation by the Belarusian Investigative Center (BIC), Siena and a network of OCCRP partners shows wood companies are evading these restrictions using misleading paperwork claiming their shipments come from Kazakhstan or Kyrgyzstan.

With prices for many wooden products skyrocketing since the EU brought in the sanctions, reporters found multiple companies that are openly offering to provide false documentation for Russian and Belarussian wood so their clients can illegally sell it in Europe.

On paper, the EU’s imports of wood from the two Central Asian states have surged from around 445,000 euros’ worth in 2020 and 2021, to over 30 million euros between June and October 2022 alone, after the sanctions started to be enforced. Yet Kazakhstan or Kyrgyzstan have few forests — trees cover less than 6 percent of their terrain — and both stopped exporting most types of wood in late 2021.

Most of the nominally Central Asian timber has ended up in Lithuania, Poland, Germany, Denmark, and Latvia, according to trade data from Eurostat. From June through October, 93 percent of wood entering the EU ostensibly from Kazakhstan and Kyrgyzstan went to these five countries.

In Lithuania and Latvia, which border Belarus and have historically been major transit routes for Belarusian goods into the EU, customs officials are scrambling to keep up with the sudden influx of suspect timber.

Inside shipments of wood purportedly from Central Asia, he said, “we find markings on packaging, extra sets of documents that directly show that the goods come from Russia or Belarus.”

In mid-November, Lithuanian customs announced it was restricting wood imports claiming to be from Kazakhstan or Kyrgyzstan in a bid to stop the sanctions evasion. But Paigozinas said that wood smugglers were already adapting to the restrictions.

“We have discovered multiple cases, but the other side is also making improvements, and the suspected attempts to bypass [sanctions] are becoming more sophisticated,” he said. “We have to prove the obvious, but the obvious isn’t easy to prove.”

In Latvia, customs officials said they had stopped three shipments of wood products with suspect paperwork from Kazakhstan and Kyrgyzstan as they tried to cross the border from Russia since the EU brought in sanctions. They admitted there was a growing problem, but said it is often difficult to prove the origin of cargo.

“The legal framework of sanctions bans only import of wood from Russia and Belarus. There is no reason to restrict import of such goods from other countries. Therefore, in this situation, they do not have to hide which goods are imported from Kazakhstan and Kyrgyzstan, declaring them under other customs codes,” Latvian customs said.

Saulius Girčys pulled back the snow-covered tarpaulin covering the neatly stacked bags of wood pellets outside his warehouse, not far from Lithuania’s capital. Many of them displayed labels from a Kyrgyz company called Agro KG.

“You see? Kyrgyzstan,” Girčys explained to two reporters who visited his warehouse posing as potential customers. “They bring it from Belarus, but because it’s forbidden they make Kyrgyz documents.”

OCCRP’s Belarusian partner, BIC, and Lithuanian partner, Siena, approached several companies they suspected of being part of the trade in Belarusian wood, posing as potential clients. Reporters decided this approach was warranted because of the public interest in exposing sanctions- busting as it occurs, and because the trade is so nascent there are few other sources of information on how it is happening. In each case, journalists contacted the companies later for comment.

Girčys, a member of the local governing board for Lithuania’s Social Democratic party, used to sell pellets made from Russian wood through the company he co-owns, Vivalsa. After the EU’s sanctions kicked in, Vivalsa was forced to source the pellets from elsewhere — though not, apparently, from Kyrgyzstan and Kazakhstan, as the company claims on its website.

“We all understand that Kyrgyzstan isn’t making those pellets,” he added.

Girčys said he had bought the pellets from a Polish company, which then delivered them directly to him in Lithuania. When a reporter asked if a customer would get in trouble for buying pellets from a sanctioned country, Girčys offered to provide paperwork to further obscure their origin.

“I’ll write whatever you want me to. It makes no difference to me,” he said. “There’s no writing on the pellet that says where it’s made. It’s also not written on our documents of acquisition.

“You’re buying it from me, a Lithuanian seller. If you want me to, I can write ‘wood pellets LT,’” he said. “It’s not a problem.”

Girčys took a different tone when contacted later by telephone for comment, saying the pellets he had shown reporters did come from Central Asia — though he seemed unclear where. He insisted that his company was not violating sanctions.

“All I know is what’s written in the papers. All the papers are in order, there are certificates of compliance, and there are pellets from Kazakhstan … I mean, Kyrgyzstan,” Girčys said. “I am violating nothing.”

Asked about his offer to create paperwork saying the pellets came from Lithuania, Girčys said he did not consider this to be breaking any rules. “I did not offer to forge documents. I said, if you want me to write [the pellets are] Lithuanian, I can do that. I don’t care what’s written,” he told reporters.

Pressed on whether he is supporting the war in Ukraine by evading sanctions, Girčys said he did not see Belarusian wood as problematic. A close ally of Russia, Belarus’ authoritarian government has supported the war in its southern neighbor, even allowing Russian troops to invade from its territory, but has not sent its own military forces into battle.

“Even if those pellets come from Belarus, Belarus basically does not participate in the war,” he said. “I don’t think my hands are stained with blood.”

By Truck and By Train

Reporters contacted the Kyrgyz company whose branding was found on Girčys’ wood pellets, Agro KG, posing as a prospective Belarusian seller. Not only was Agro KG able to ship the wood, a company representative told BIC, it was seeking to expand its operations.

“We are shipping it in trucks, and now we want to use trains,” said the representative.

Agro KG is one of several Kyrgyz and Belarusian companies that offered to provide false paperwork to reporters posing as potential clients that would allow them to evade sanctions to sell Belarusian wood in the EU.

In Belarus, reporters found an existing certification company that has diversified into providing paperwork to avoid sanctions. StandartnoBy offered to make Kyrgyz certificates when contacted by reporters, who said they were calling from a Polish company that wanted to buy Belarusian wood products.

“With these certificates, manufacturers of lumber and other products can try to confirm with EU customs that everything is from Kyrgyzstan,” a representative of StandartnoBy said in a Telegram message, attaching an example of the documents they offer.

Narchuk denied that any companies connected with him had offered to help anyone evade sanctions. “We operate strictly according to the letter of the law. We do not falsify any documents,” said the Belarusian businessman. Asked about his employee’s offer to create misleading paperwork, Narchuk speculated they were trying “to attract the attention of customers.”

Most of the wood ostensibly coming from Kazakhstan and Kyrgyzstan was sent to Lithuania, Poland, Germany, Latvia, and Denmark, according to European trade data.

In Poland — which borders Belarus and has taken a hard line against Russia’s invasion of Ukraine — imports of wood from Kazakhstan have jumped from 108,000 euros in the whole of 2021 to more than 7.4 million euros’ worth in just five months this year.

Latvia has imported 1.6 million euros of wood products from Kazakhstan since June, despite buying almost no wood from the country in previous years, while its imports from Kyrgyzstan also rose at a record speed.

Nerijus Mačiulis, chief economist at Swedbank Lithuania, said there was no way that all this wood could be coming from the two Central Asian countries, which are not major timber producers and had both banned almost all wood exports in late 2021, several months before the EU sanctioned Russia and Belarus.

“It is obvious that there is an increasing number of countries and intermediaries who provide assistance in finding ways, means, and routes for Russia to bypass sanctions,” Mačiulis told OCCRP.