So Rich, So Poor 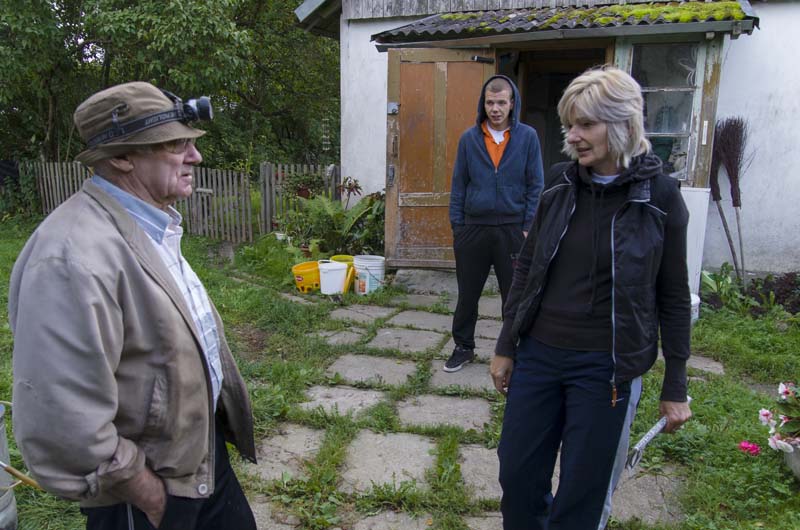 When a year ago, Dzintra Briede got divorced, lost her job and all of her income, this mother of four moved in with her father, who lives in the small village of Bunka, in the Western Latvia. Turns out that in this region of Latvia, Dzintra’s family is considered “rich.”

“The road here is terrible, so people rarely come to visit us,” Dzintra Briede explained while greeting us at the end of the road near her home in the village of Bunka, Latvia. Local government workers recently tried to fix the road. They dumped truck loads of bricks into the deep holes of this gravel pathway, but it is still not suitable for cars. “My father wasn’t feeling well recently and when emergency help came, the nurses had to run with their supply bags through the woods,” the 42-year-old mother of four children told us.

Dzintra was born and raised in Cesis, but some time ago got divorced and lost her job. She didn’t have enough money for rent or food and the family moved in with Dzintra’s father in the rural Bunka. The Soviet-era house has three small rooms. There is no bathroom or a shower, just a small outhouse in the yard. The family doesn’t own a car and the closest bus stop is about three kilometers away.

Dzintra’s biggest purchase this year was a used refrigerator that she got for 28 euros. “We were so glad to bring it home. Now we can store the milk, eggs, and cream given to us by our neighbors. ”

A plate filled with warm pastries sat on the small kitchen table as we walked into the house. Dzintra learned how to make these rolls in her most recent job as a baker that she lost last July. Before that she also worked in the local store in Bunka, a local sawmill and as a gardener. She never made more than the minimum wage, but always had enough for food and rent.

The local social workers of Bunka though consider Dzintra’s family wealthy and don’t think she is entitled to any welfare benefits. “They consider us rich,” Dzintra explained, because her father receives a large pension for Latvia: 430 euros. The state gives this higher pension to people who have been repressed during the Soviet era. Dzintra’s father spent 10 years in a prison in Siberia for resisting Communism. “They shame us when we call for assistance. But it is an injustice to my father. Didn’t he earn his pension. Why does he have to share it with all of us? ”

The local social workers did give Dzintra a two bedroom, government-subsidized apartment. But there is no electricity, no windows, and the doors are boarded up. “You can’t live in that apartment.”

Dzintra hasn’t been able to find a job in Bunka or nearby villages. Jobs in the closest city of Liepaja are 40 kilometers away and the commute would eat up a third of her minimum-wage salary. Dzintra doesn’t want to move abroad to look for work either. “My mother left us when I was ten years old and my father raised me by himself. My conscience doesn’t allow me to leave him alone. ”

Dzintra’s son Marcis (19) who has worked for more than a year in Ireland, has decided to return. “I didn’t press him to come back, but the connection among all of us is very strong,” said Dzintra. The middle daughters Liga (22) and Ance (21) have finished high school, but have not started studying in university, since they didn’t receive one of the state’s stipends, and they don’t want to borrow money for studies. Liga works in Liepaja at the `Elvi’ store, and Ance is looking for work.

But this fall came with additional pressures. Dzintra had to find 20 euros to send her youngest daughter Sabine to the first grade. The school had sent a statement requesting Dzintra to provide school supplies: 11 exercise books, pencils, 70 kilograms of potatoes, 3 kilograms of carrots and a jar of jam. Dzintra had to find winter boots for her daughters, and extra money to pay half of the school lunch expenses.

“These days people are saying that the economic crisis is over. But I wonder in what way has it ended? Maybe the government is feeling it in their treasury. But here, we have the same number of beggars on the street. I see they same number of unemployed people,” Dzintra said sitting at the kitchen table, as she offered more pastries for her visitors.

“But I try to live in the present day and not worry about the things I can’t control. When things get too hard, I go to the forest, and scream my frustrations out. Then I come back home, wash my mouth with cold water and continue to fight. I make some pastries, my family gathers outside by the fire.  My father makes delicious wine from homegrown grapes and apples. We have the most important thing in life—a sense of home. My children know that no matter what happens in life, they can always come back home. “