What the FinCEN Files reveal about Latvia? 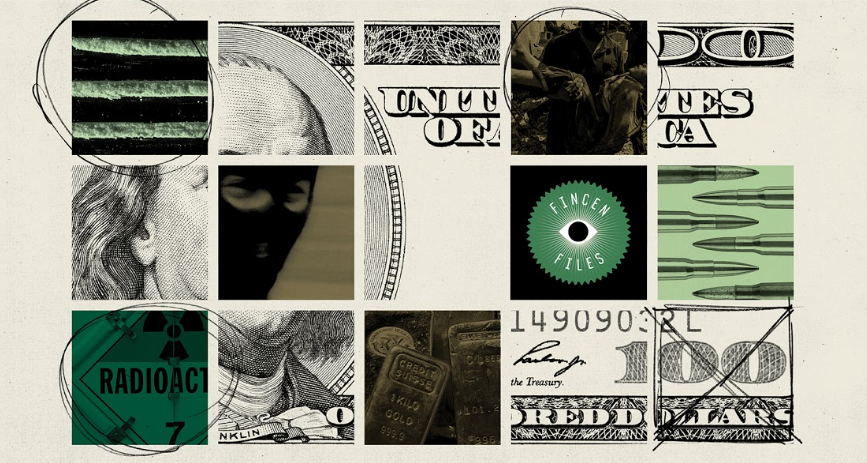 The leaked suspicious activity reports written by the US based banks to the country’s financial crime investigators reveal that Latvia was considered a high-risk jurisdiction for years.

A large trove of documents has been leaked, revealing global transactions, including those flowing through Latvia, that the US based banks flagged as suspicious to its supervisor. The documents expose that the US banks eyed with suspicion transactions totalling at least $7.6 billions wired through Latvian banks between 2006 and 2017, Re:Baltica’s year-long investigation found.

Documents, known as the FinCEN Files, were obtained by BuzzFeed News which shared them with the International Consortium of Investigative Journalists (ICIJ) and 108 news organizations around the world, including Re:Baltica.

The leaked documents include more than 2,100 suspicious activity reports written by banks and other financial firms and submitted to the U.S. Treasury Department’s Financial Crimes Enforcement Network (FinCEN) between 2000 and 2017. According to BuzzFeed News, some of the records were gathered as part of the US Congressional committee investigations into Russian interference in the 2016 U.S. presidential election while others were gathered following requests to FinCEN from law enforcement agencies, including Latvia’s Financial intelligence unit (FIU). These sources provide a unique, bird’s-eye view of illicit money flows that supported worldwide corruption and criminality.

In all, an ICIJ analysis found, the documents identify at least $2 trillion in transactions that were flagged by financial institutions’ internal compliance officers as possible money laundering or other criminal activity. Suspicious activity reports reflect the concerns of watchdogs within banks and are not necessarily evidence of any criminal conduct or wrongdoing.

Though a vast amount, it is just a drop in a far larger flood of dirty money gushing through banks around the world. The FinCEN Files represent less than 0.02 percent of the more than 12 million suspicious activity reports that financial institutions filed between 2011 and 2017.

Latvian banks whose names show up in FinCEN Files said that they observed all the legal requirements to prevent money laundering. They reported suspicious transactions of their clients and cooperated with law enforcement authorities. Banks refused to comment on clients transactions or suspicious activity reports, as the law does not permit it.

Latvia’s banks required access to the US financial institutions to make transactions in the US dollars. The US banks reported transactions via Latvian banks when wires involved shell companies, whose beneficial owners can remain unknown, when the sums were suspiciously large, the purpose of transactions unclear, or when politically exposed persons or people linked to them were involved.

However, this doesn’t mean that all the transactions which the US based-banks flagged were or are proof of criminality or wrongdoing. Graham Barrow, a recognised anti money laundering expert and freelance investigator, explained that the banks are required to file a suspicious activity report when they see an unusual activity that potentially relates to money laundering or financial crime which they are unable to explain. Failing to report is a criminal offence in most countries.

“The job of the bank is merely to inform the FIU. The bank will never form its own opinion whether this is an offence or not, that’s the job of the financial intelligence unit,” Barrow said to Re:Baltica.

However, a large part of suspicious activity reports never get investigated, often because they are poorly written and don’t make it clear what the basis of suspicion is, said Barrow.

Documents reviewed by Re:Baltica show that banks would investigate their suspicions looking for public records, company and court registers, adverse media databases, and other resources. Several suspicious activity reports quoted Re:Baltica investigative reporting on money laundering. For example, the Bank of New York Mellon, reporting about companies which potentially might have been involved in the $230 million tax fraud in Russia known as the Magnitsky’s case, cites Re:Baltica article about shells involved in the scheme.

The fact that powerful politicians and businessmen from neighboring countries in the East had used Latvian banks to move their money is nothing new. Latvia positioned itself as a bridge that allowed citizens of Russia and other countries in Eastern Europe to transfer money out of their home countries before depositing it elsewhere, for example, the United Kingdom or Switzerland, for decades. As a result, the illegal proceeds also flowed through Latvia in all the boldest money laundering schemes of the past decade, such as the Magnitsky’s case, the stolen Moldovan billion and the Russian Laundromat, among others.

However, FinCEN Files reveal names of people, who might have been mentioned in the media in relation with Latvian banks, but which was not confirmed by facts. For example, the leaked documents reveal that Latvia’s banks were used by oligarchs from Russia (Oleg Deripaska, Roman Abramovich) and Ukraine (Dmytro Firtash), as well as politically exposed persons from Ukraine (Viktor Yanukovych, Oleksandr Yanukovych) and the US (Paul Manafort).

No Estimates From FIU

Ilze Znotiņa, the head of Latvia’s FIU who started in June 2018 shortly after the third largest Latvia’s bank and internationally recognized “laundering machine” ABLV Bank collapsed, following the US decision to ban it from accessing American banking system, says that  historically money laundering schemes employed in Latvia were rather primitive utilising a lot of shell companies.

“Often banks themselves had established companies that provided legal and accounting services. A client, who wanted to transfer money through Latvia’s banks, might not even know through which shells money flowed before landing in a shell controlled by him in Belize or British Virgin Islands,” in an interview to Re:Baltica said Znotiņa.

Now the situation has changed, and Znotiņa is sceptical that such transactions as before could sift through the control sieve undetected. It takes her good 15 minutes to list the things that have changed since she took over FIU. She lauds change of the agency’s oversight and building its capacity, improvement of suspicious activity reporting system and introduction of regular feedback sessions with the banks.

Znotiņa refuses to estimate how much of the money flowing through Latvia’s banking system might come from illicit proceeds. In recent years, however, less money is flowing through local banks. Latvian banks’ customer payments to other countries decreased by 64% between 2015 and 2019, including the most significant decline in cross-border payments in foreign currencies, which fell by almost 90% (to the equivalent of 11 billion euros last year), according to the Bank of Latvia’s data. However, the money frozen in Latvian bank accounts showed the size of the problem. Until September, 2020, on suspicions of money laundering 391 million euros were frozen, most of it (314.6 million euros) were frozen in the banks which are in liquidation – ABLV Bank, PNB Bank un Trasta Komercbanka.

Not Disclosing The Source

BuzzFeed News has not commented on the identity of the source.

Prosecutors said the material she had disclosed appeared in approximately 12 articles.

They did not name the publication in which the articles were published but the headlines and dates corresponded to articles published by BuzzFeed News.

The court plans to announce her sentence in October.

Edwards’ lawyer at the time of her January court appearance, Marc Agnifilo, said she had the best intentions when disclosing information. “She was of the view that certain critical facts weren’t being handled the right way by the government agencies whose responsibility it was to handle these things,” said Agnifilo, who is no longer Edwards’ lawyer. “She went to the media and said if I can’t trust the government officials to handle this, I think I can trust the media to handle this and bring this to the attention of the American people.”

Now information revealed by FinCEN Files will gain a much wider audience than only in the US.

Read ICIJ articles about the findings in FinCEN files in English here.

“ABLV Bank is currently undergoing liquidation and within this process an independent auditing company is carrying out a thorough review of the bank’s former clients and their transactions.”

“The Bank stresses that it strictly complies with Latvia’s legislation (..).

When beginning and maintaining a business relationship with a client, the bank shall, by taking risk-assessment-based measures, clarify the potential or existing client’s operations’ geography, business partners and types, as well as other aspects, and determine the scope and procedure of due diligence, including to avert as much as possible the bank’s involvement in violations of anti-money-laundering requirements and sanctions, or their evasion or attempting such practices.

“In accordance with changes in regulatory requirements and according to the bank’s new business strategy, the bank has ceased cooperation with clients from increased risk regions, closing accounts to approximately 90% of foreign clients in the period between 2018 and 2019.”

“The US banks do their job just as we do – we report to our FIU, the US banks to theirs. And that is our, as well as the US banks’ task – to be able to identify potentially suspicious transactions performed by our customers and to report it according to the procedures set in the legislations.”

“Industra Bank is fully cooperating with its correspondent banks, and, possibly, because of the active involvement of Industra Bank, the discovery and investigation of suspicious customer transactions has been possible and the responsible persons are held liable.”

“We can only comment on information published in accordance with legislation. Unfortunately, in your question it was not mentioned.”

“We would like to inform that since 2016 the bank continues to implement a number of processes, the aim of which is to improve internal control system. The bank’s activites continue to change, with the reinforced anti money laundering requirements and in response to the general situation in Latvia’s banking sector.”

“Transaction control and submissions of the required reports to supervisory institutions is a globally accepted banking practice. We execute such control, our partners and correspondent banks do the same. Doubtless, we know about it.

In itself, the fact that a given transaction complies with the criteria which necessitates submission of a report does not indicate neither its legitimacy nor the contrary – that is determined in the following analysis.

It must be stressed that during the period chosen for your investigation (2000-2017), the approaches and requirements for the work in anti-money laundering (AML) area have radically changed in both Latvia and the world; standards, definitions and procedures have been improved, taking into account the current practices and world experience, based on national and international legislation.”

“Taking into account documents at my disposal and information about the bank’s practices in the field of anti money laundering, my opinion is in line with what law enforcement authorities have detected. The bank has had shortcomings in the area of preventing money laundering, its approach to the implementation of internal control system and risk management has been incomplete. But in the light with the ongoing legal proceedings before the European Court of Justice, I will refrain from comments about the circumstances of the withdrawal of the licence.”

Rigensis Bank and PNB Bank did not reply

END_OF_DOCUMENT_TOKEN_TO_BE_REPLACED

Translated into English by Aleksejs Tapiņš