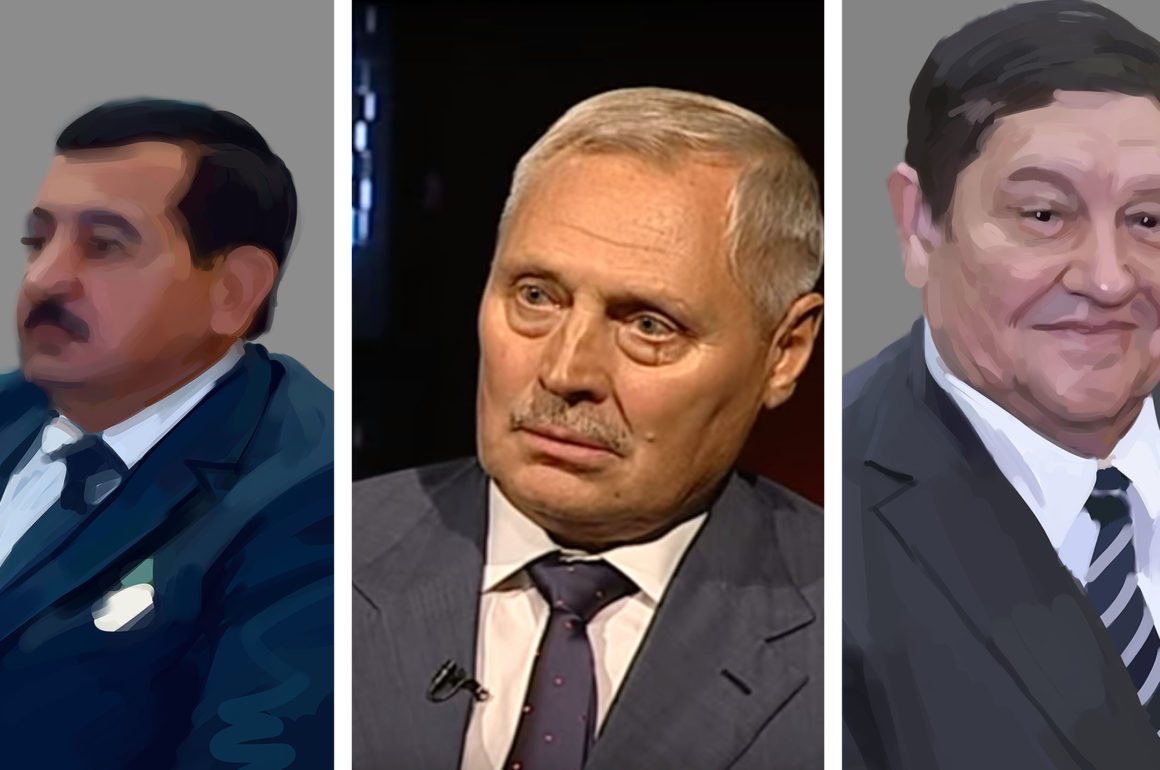 Former KGB officer who after collapse of USSR became a millionaire as an intermediary in Russian gas trade to Latvia appears to be instrumental in helping high-ranking Uzbek security officials to gain a second base in Latvia.

Among the pine trees and birdsong of the tiny village of Sunīši  a half-hour’s drive from Riga looms a settlement of large private homes. The street which winds through them ends at a guard post with a sign that reads “No entry.” .

Inside, the largest known Uzbek community in Latvia has settled.

Its unofficial leader is businessman Rustamdyon Nurmatov, who has been living in Latvia for more than a decade and is involved in cargo transit and the real estate business. Nurmatov also owns a restaurant “Māja” (“The House”) in the trendy Kalnciems Quarters in Riga.

“Re:Baltica” meets him there with many questions. Instead, he offers a traditional spicy Uzbek dish of rice and meat.

“I have no comments. I know nothing,” he says,  either about goings-on in Uzbekistan or  his neighbors in the Sunīši community. 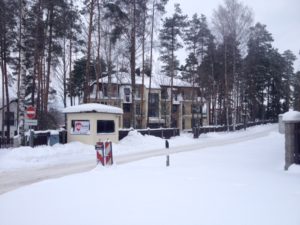 One of those neighbors is Yury Savinkov, the former head of Uzbekistan’s branch of “Interpol”, the international law enforcement network. Filings in the Latvian Land Registry show that he owns 182.6 square meter apartment in Sunīši.

Savinkov is also co-owner of a company called “Baltic Express Trade”, which was supposed to be  a transport business, but never did anything before closing in the spring of 2015, documents from Latvian Business registry shows. 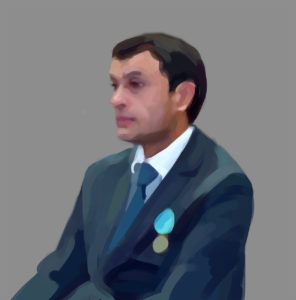 A few months later, Uzbekistan put Savinkov on a wanted list and he was arrested in Moscow and extradited to Tashkent in August, 2015. He is now in prison, sentenced for conducting illicit business, taking cash out of the country, abuse of office and corruption, according to “Radio Free Europe/ Radio Liberty” in Prague.

Even though his Latvian business never got off the ground, Savinkov had a business partner, another Uzbek national named Ovik Mkrtchyan. Mkrtchyan had a separate company, “Baltic Car Logistics”,  which is a rail freight forwarding agent that rents out rail cars for vehicle transportation. His main business lies with Central Asian countries.  In 2014, the company’s turnover was slightly less than € 10 million. The profit was € 270,000.

According to filings in the Latvian Land Registry, Mkrtchyan bought a plot of land worth € 1 million in Riga and had an apartment in Sunīši, too. He had acquired a right to live in the country via Latvia’s controversial “golden visa” program, a European Union (EU) residency-for-cash scheme. 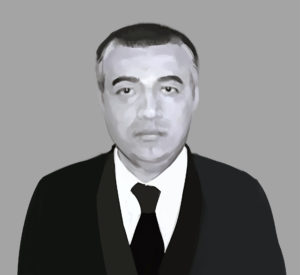 Mkrtchyan also owned a seven percent share in Russia’s “Volga-Credit Bank”, which lost its license in December 2014 and faced fraud charges in early 2015. Russian prosecutors said as much as 3 billion Russian rubles may have been stolen (about € 38 million).

Gulnara Karimova, the eldest daughter of Uzbek President Islam Karimov, has claimed in an interview that there is a connection between the Uzbek secret services, the transit industry, cotton production and money laundering.

She claimed in the  Turkish daily “Hurriyet Daily News” at the end of 2013 that “Gorefield International” was one of the companies involved in money laundering for the Uzbek security services.

The name is similar to the original name of Mkrtchyan’s Latvian transit company “Baltic Car Logistics”, which was first called “Gorefield Baltic Logistics”. Both companies are financially linked.

According to the company’s annual report, at the end of 2014, Mkrtchyan’s Latvian company received around € 6.5 million in loan and advance payments from the United Kingdom-registered “Gorefield International Inc. Ltd.”.

“Re:Baltica” left messages requesting comment in at Mkrtchyan’s small office in central Riga, but they were never answered.

Mkrtchyan’s  business partner Savinkov is one of several Uzbek nationals connected to law enforcement who have property or business interests in Latvia, but they are difficult to trace as transactions are carried out via intermediaries.

Juris Savickis, a former officer of the Soviet secret service better known by its acronym KGB, appears to have started the trend. After the USSR collapsed, he became a millionaire while acting as an intermediary in the trade of Russian gas to Latvia. 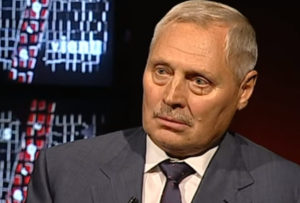 At the end of 2014, Savickis used land worth about € 1.8 million euros in the expensive seaside resort of Jurmala as capital stock in the newly founded company “Latuzvis”, the data from Latvian Business Registry shows. Eight-five percent of the shares belong to the Cyprus registered company “Nestol Holding CY Ltd.”; its true owners are unknown.

Savickis refuses to identify his partners, apart from saying that they are Uzbeks.

But he admits that he knows Rustam Inoyatov, the head of Uzbekistan’s National Security Service  (SNB), although he won’t say when they last met. Inoyatov was spotted in 2014 at the last “New Wave” pop festival in Jūrmala , a glitzy extravaganza with ageing Russian pop stars and popular meeting place for ex-USSR millionaires. 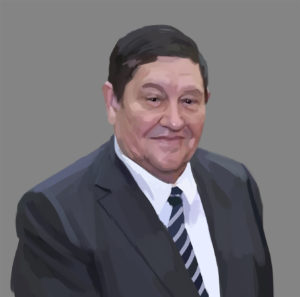 Savickis also confirmed to “Re:Baltica” that a few years ago he discussed potential business with Inoyatov’s deputy at the time, Hayot Sharifhodjayev (he  was sacked in May 2015 when several SNB officers, including his brother, were arrested).

According to “Re:Baltica” sources, Sharifhodjayev came to Riga in 2013 with several other people, including businessmen, at Savickis’  invitation. Savickis confirms the meeting, but claims he cannot remember details including whether he was the host.

Apart from “Latuzvis”, Savickis made a loan of € 1.8 million to the “Amber Spa Hotel”, a wellness center and resort in Jurmala,  with real estate owned by the company as a collateral, according to the Latvian Business register. Although the wellness center legally belongs to two Latvian-registered companies, “Grateka” and “LT Services”, they are controlled by another Cyprus-registered offshore company, “Vontel Trading Ltd.”.

According to the documents from Cyprus Business register, the official beneficiaries of this offshore are four Uzbek citizens: Abdurayimov Bokhodir, Alimov Alisher, Kasimov Amid-Said and Gaziev Atabek. They also own a guest house “Lauvaskalni” in the district of Umurga, more than an hour away from Riga.

One of the board members of “LT Services”, the Latvian company which co-owns the resort, is Artur Adilov. His name is the same as Sharifhodjayev’s close relative, but “Re:Baltica” cannot confirm that it is the same person. “Re:Baltica” left a request for comment from Adilov with the resort’s representative, but never heard back.

Savickis says Sharifhodjayev has nothing to do with the ownership of the complex, but answered no further questions about it.

A wellness center and resort in Jurmala, and a guest house “Lauvaskalni”. Photo: Re:Baltica

When “Re:Baltica” asked Latvian Security police if they are informed about the business activities of Inoyatov and Sharifhodjaev in Latvia, the press office confirmed it, but refused to provide any details.

Translated from Latvian to English by Aleksis Tapins