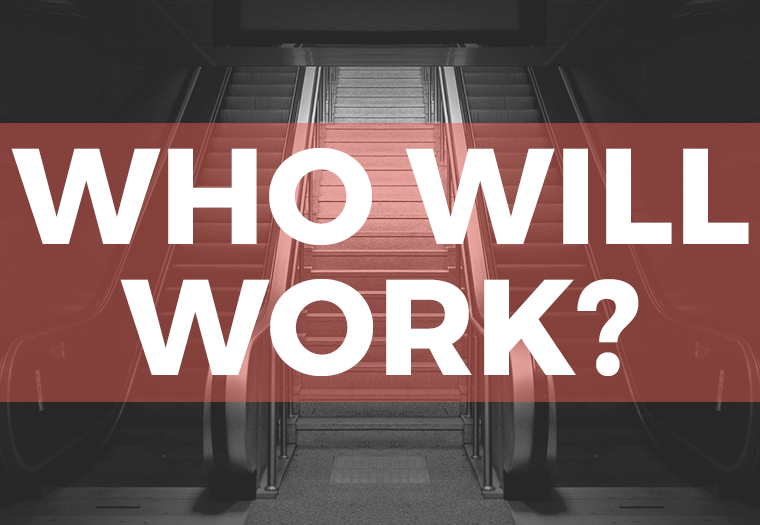 Negative memories of forced migration during the Soviet occupation hold back a discussion how to fill predicted 35,000 labour gap.

Accenture, a global IT company, this year conducted a promotional campaign looking for workers in the Latvian regions. The incentive was an offer to work from home. More than 100 people signed up.

The head of the company’s branch in Latvia, Maksims Jegorovs, is optimistic about the results as even some local governments have expressed an interest. Valka, a town on the border with neighbouring Estonia, has offered working space rent-free. The local government in Madona, a small, mostly rural municipality of about 10,000 people in eastern Latvia, has regularly inquired about the skills the company was looking for and local schools have pushed towards math and computer science.

“The local governments are very active. There is no political divisions like in a large cities, so they approach their affairs pragmatically,” says Jegorovs. “I am very happy with what I see.”

By the Latvian standards, Accenture is a large company, employing about 1,258 workers, with plans to expand to 2,000 in the near future. To lure qualified workers the company uses local and international headhunting firms, conducts intensive courses for students and re-trains adults with non-technical degrees.

Jegorovs does not sound worried about the potential shortage of labour. He hopes more people would study IT in the future and the company would have a choice of workers.

The economy ministry, however, paints a very different picture. In 2021, there will be the surplus of about 10,000 professionals in humanities and social sciences. At the same time, maths and engineering will face a shortage of 16,000 workers. Also, about 30,000 people with vocational education will be needed on top of the ones graduating that year.

After joining the European Union in 2004, Latvia has suffered a dramatic population loss. Many Latvians boarded planes to live and work in Ireland, United Kingdom and other western European countries with a higher salaries and living standards. As a result of mass migration compounded with the death rates exceeding the birth rates, the population shrunk from 2.2 million people in 2004 to 1.9 million people in 2017, according to the Central Statistical Bureau of Latvia.

To grow or not to grow

If the “positive scenario” by economy ministry sees the daylight, Latvia will need at least 35,000 extra workers by 2022. The number may be small on a global scale, but for Latvia, this is similar to a medium-sized city.

The calculations are based on assumption that GDP would grow by about 5 percent every year and looming labour gap would transform the structure of Latvian economy, forcing the focus to technological solutions and innovations instead of low wages and expenses.

As a result, the population of Latvia would be only a little smaller than it is today: about 1.92 million.

If the GDP grows 2 to 3 percent a year (as it has been in the last few years), a negative scenario may come to fruition and by 2030, Latvia’s population would drop to 1.64 million people.

“This is a downward spiral with no exit,” Jānis Salmiņš, an expert at the ministry of economy, describes the negative scenario. “The population numbers would shrink, the number of people working would fall, labor costs would rise. It would be hard to create jobs and the economy would grow slower.”

This is why this isn’t a question of economic growth, but also of the future of Latvia as a nation, concludes the minister of economy Arvils Ašeradens (from the ruling Unity party).

Latvia has a history of influx of workers during the Soviet occupation, when the Soviet government sent migrant workers from the other parts of the communist empire to the Baltic nation with a purpose to build factories and russify the formerly independent state, tipping the ethnic scale in favour of non-Latvians.

In the late 1980s, the plans to construct a subway system in the capital, Riga, drew protests from ethnic Latvians, who feared that the influx of workers would spell the end of the Latvian nation. The subway never materialised, but these protests culminated in Latvia regaining its independence from the Soviet Union in 1991. After the fall of the Soviet Union, those workers and their descendants, many of whom are Russian-speakers, were not granted automatic citizenship and their position continues to dominate the political life of Latvia to this day. Failure to integrate the large parts of Russian-speaking population in Latvian society has turned many Latvians fiercely anti-migrant.

The fear to pronounce the words “foreign workers” is reflected in the ideas how ministry of economy proposes to fill the upcoming labour market gap. First proposal is to motivate expats to return (target is around 22,800 people), followed by retraining of existing workers (around 12,500).

However, this scenario would require significant changes in the education and the business culture. Currently, the education system produces a lot of “cheap” laborers, but demand for these professions would decrease in the future, the ministry forecast shows. After graduating from high school, only two thirds of students enter a university.

Compared to other EU states, very few adults in Latvia seek to change careers to match the market demands. They are likely to be unemployed.

“The standard of secondary education is falling dramatically. It’s even more tragic in our institutions of higher learning. The economy demands completely different skills, but the education system, with a few notable exceptions, refuses to change,” says Ašeradens.

He claims that one positive example is found in vocational schools which have benefited from the massive investment of EU funds. Although the number of students is slowly rising, Re:Baltica’s previous investigations have shown that a modern equipment and a new shiny school buildings do not automatically translate into the higher educational standards. One in five vocational school students drop out. The ministry of education has no data what happens to them after that.

The problem with the business sector is different. The economy ministry blames poor foreign language knowledge and lack of desire to innovate as key reasons why the business sector is unable to change. “We try to keep a worker whom we pay very little and in whose education we do not invest. We want to invest even less in innovation, a new technological approach that would allow me to be competitive with others,” says Ašeradens. 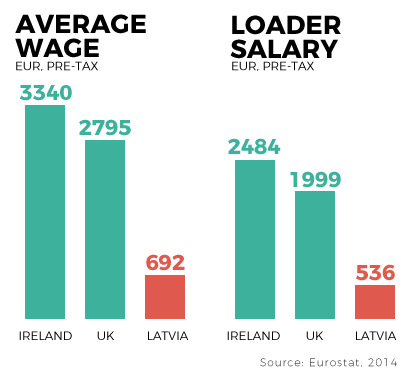 Minister Ašeradens believes that the labour shortage will force employers to change as Latvians would no longer agree to work for low wages. This year saw a sharp increase in the average wage (927 euros a month before taxes). The ministry hopes that in 2018 it can reach 1,000 euros, and in the next five years 1,500 euros. With that, the wages would move closer to the average salaries in the countries that welcomed Latvian migrants after the country joined the EU. It would also motivate them to return.

In many opinion surveys, however, the Latvian expats say that apart from wages, stability and security are important to them, and they don’t feel that in Latvia. Changes in the education system are happening slowly, as demonstrated in the Re:Baltica’s earlier series about half-empty schools, which local governments are afraid to close to improve education quality in the others.

Latvia has very few sources of additional workers. If the expats don’t return, locals cannot be forced to retrain, and it is already too late to hope for more births, what is left is immigration.

Accenture has already done that. Every fifth worker is a foreigner from one of the 27 countries, including Lithuania, Canada, Argentina, Spain, Belarus and Ukraine. The highest number is from the neighbouring countries, excluding Estonia where wages are higher than in Latvia. Workers from Morocco and Egypt see Latvia as an entry point into the EU.

The workers at Accenture seem to match a profile of the guest workers in the country, according to the data from the Department of the Citizenship and Migration Affairs. In 2016, top three source countries for guest workers in Latvia are Ukraine, Belarus and Russia.

In the last five years, their numbers has doubled. The government issued 6,007 work permits in 2016. Highly-demanded professions are  long-haul truck drivers, which account for almost half of all guest worker permits, followed by IT, catering and construction.

Latvian government will have to make a political decision – “smart” jobs or cheap foreign labour – in very near future.

To facilitate arrival of highly qualified workers, the ministry of economy has drafted a list of professions where people can be brought in if no Latvian resident has applied the job in two weeks (instead of the current one month).

But it got stuck because the ministry of transport is asking to include also long-haul truck drivers on the list. There is already a labour gap as a the job is physically hard and the drivers spend a lot of time away from their families. It pays only 700 euros before taxes (not including a per diem). The ministry of economy opposes the request because “then everything’s out the window. Businesses have no motivation to think about innovation. This is why we intentionally put on the list highly-qualified professions, which should force changes,” explains Jānis Salmiņš, the expert at the ministry of economy.

The loudest opponents against guest workers are the right-wing National Alliance (NA), which draws on support from mostly ethnic Latvians in the ethnically-divided country. But even its board member Janis Iesalnieks admits that the shortage of labour will not be solved with higher birth rates because there are too few women in the fertile age. This is why NA hopes automation and influx of highly-qualified workers is a solution, but in much smaller numbers than has been proposed. 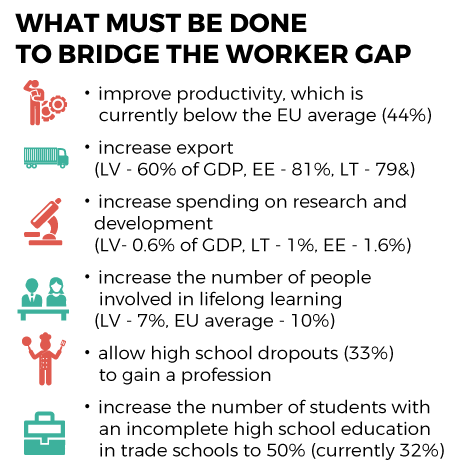 “The artificial intelligence is developing and in Latvia too innovative solutions are being created, diminishing need for manual labour,” says Iesalnieks.

The chairman of another party in governing coalition, the Union of Farmers and Greens (UFG), Armands Krauze believes a priority should be attracting Latvian expats to return. Guest workers would be the last resort, and they shall come from from countries whose mentality and culture is similar to Latvia’s, such as Ukraine. UFG would not oppose attracting guest workers for manual labour for farming (the party draws a lot of its support from the countryside). “There are a lot of Ukrainian guest workers that work in Poland and then we wonder why their products are cheaper,” says Krauze.

The largest opposition party, Harmony, draws most of its support from the Russian-speaking minority. Its representative Andrejs Potapkins says that there are 66,000 unemployed in Latvia, therefore finding 35,000 workers shouldn’t be difficult. The party does not hope for expats as the salaries are still low and the tax burden on smaller wages is high. As a solution, Potapkins proposes the creation of an effective retraining scheme. “If an employer is ready to hire a foreigner, but is not ready to hire a Latvian resident, helping him to gain necessary training, then the state does not promote retraining of workers and does not motivate employers to invest in retraining.”

Mārtiņš Bondars, a former leader of the Latvian Regional Alliance, supports the tightly-controlled guest worker program. Otherwise, he says, there would be not enough people who would pay for pensions and social benefits.

None of the questioned politicians has a clear plan how to implement all the listed priorities. The politicians will likely avoid the question until the next general elections in the fall 2018 in order not to lose their conservative voters. “People are not ready to give their votes for the demographic issue,” says Bondars. “If I were to say I am for controlled migration, part of voters would not vote for me.”

END_OF_DOCUMENT_TOKEN_TO_BE_REPLACED

Illustrations and graphics: Lote Lārmane, Re:Baltica
Data analysis: Zane Vārpiņa, a demographer and an assistant professor
at the Stockholm School of Economics in Rīga


The series are financed by State Culture Capital Foundation;
the statistical analysis was sponsored by Friedrich Ebert Stiftung, Germany.